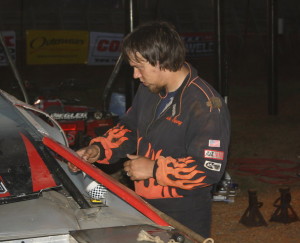 Josh Henry already has a track championship to his credit. The Newport driver took the NeSmith Chevrolet Crate Late Model title at the Smoky Mountain Speedway in 2009 after winning nine feature events that year. But now, the soon to be 23-year-old hopes to add another trophy to his collection in 2014, this one for a Late Model track championship at the Tazewell Speedway.

“I think we’re going to try to race most of the time up there,” Henry said of his plans for racing on the ultra high banks of the Tazewell Speedway. “I’d really like to try to win a championship up there. Last year we were really good all year long. I feel like we should have won more races than we did, but it seemed like we were always right in contention to win. Somehow I could usually outrun just about everybody but there would always be one guy who was just a tick better than what I was.”

And Henry believes he has the equipment and the support of family and friends to make a run at the track championship. A new chassis along with a Pro Built Engine are the tools with which this driver will work during 2014. 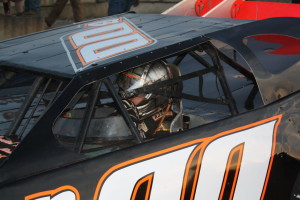 Henry in his familiar #B00 ride.

“We’ve got a new Rocket car this year and I really think it’s going to help us out a lot,” he explained. “We’re going to try to win as many races as we can and try to win that championship, for sure. If I could 5-6 races and run in the top-3 most every week, I’d be real happy.

“Brent Hensley and Josh Driskill are two people I can count on for help when I need it,” Henry said of the support he has should he have to get through any unforeseen events on race nights. “If something happens to my car, I can drive one of theirs if something goes wrong in hot laps or qualifying.”

Racing is a way of life for Henry and his family. It’s those relationships throughout life that have brought him to this point in his career. The son of driver Skimp Henry knows where his desire and competitive nature came from.

“Ever since I was little, I’ve gone to races with my dad. In my eyes, he’s one of the best racers around. My drive for racing comes from him. The work and time and effort he puts into it makes me want to be a racer myself. To me, racing is just about the best fun in life.”

Henry believes that the experience he gained in 2013 while splitting time in Super and Limited Late Models showed that he can compete on a weekly basis at Tazewell.

“I ran some with the Peg Leg Motorsports team in supers last year, but I ran about 60% of the time at Tazewell,” Henry pointed out. “I still finished third in the points up there last year.”

But the thing that Henry hopes will serve him best of all this season is his experience on the track known as the ‘Bad Fast Taz’.

“Tazewell is one of the fastest race tracks I’ve ever been on. Everything happens so fast there. You’re in one corner, and before you know it, you’re in the other corner. It’s just such a different animal, but it’s definitely the most fun race track I’ve ever been on. When you come off the corner you better hope nothing is happening in front of you because if you’ve not already started to dodge it, you’re going to hit it.”