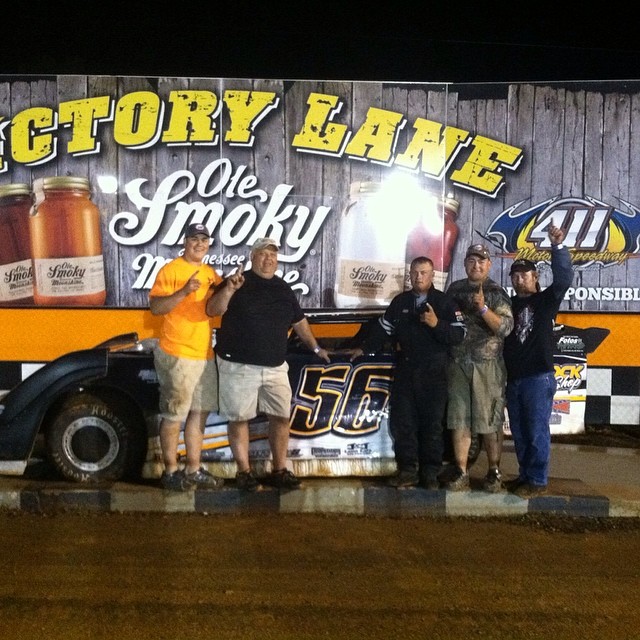 After having to wait out a near three hour rain delay, action finally got underway at the 411 Motor Speedway on Saturday evening. With an 11:00pm curfew looming, track officials opted to line cars up for the feature races based on a draw that had been conducted during driver sign ins. Also, all feature races would have to be shortened due to time constraints.

It should be noted here that track owner Mitch McCarter offered drivers the choice of racing under the abbreviated schedule or calling the event off. The drivers voted overwhelmingly to race.

Race officials set the distance for this event at 15 laps but multiple early cautions would cause the time limit to be invoked and the distance cut to 10 laps.

Pole sitter Tony Lindsey went to the early lead but Jordon Horton took advantage of early attrition to move up on the starting grid. That, in turn, would put him on the leader’s back bumper once the race got going.

Horton moved around Lindsey after the completion of one lap and moved on to claim the win.

Race officials set the distance for this race at 15 laps.

Strangely, an accident on the pace lap would impact this race as defending track champion David Price and Jerry Hux would be eliminated.

Once the feature got rolling, this class provided what was possibly the race of the night. Pole sitter Bradley Lewelling got out to the early lead but Walter Sims moved up quickly from his mid-pack starting spot. Those two drivers exchanged the lead multiple times during the first half of the race.

On lap 6, a slow car spun and collected Sims in the incident. Sims was given his spot in the running order back but the damage done from the contact would play a role in the outcome.

Sims passed Lewelling on the restart from that caution but had his right front fender fall off in the process. From that point, Lewelling went back to the lead and had to hold off the determined efforts of Gary Blanken, Shannon Emery and David Clark for the win.

This race ultimately fell victim to the time limit as the curfew drew near. The distance was cut to 10 laps as a result.

Race officials set the distance for this race at 15 laps.

Even though he drew the sixth starting position, Michael Courtney charged to the lead by the end of the first lap. From that point the domination shown all season by the #41 car continued as Courtney drove to his fourth win out of the four races he has entered at this track in 2014.

Only four cars signed in for competition in this class. As a result, track officials set the distance for the race at 10 laps.

After an early caution for a crash involving front row starter Larry Sullivan, the race got going and Chase King led all the way for the win.