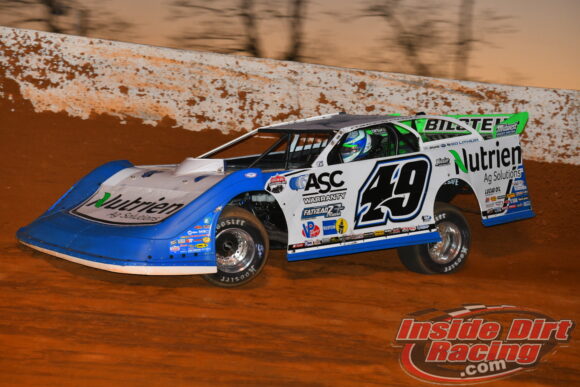 After suffering two rainouts last weekend, the Lucas Oil Late Model Dirt Series kicked off a two-race weekend on Friday night at the Ponderosa Speedway in the John Bradshaw Memorial. After pulling off a last lap pass, Jonathan Davenport came away from the Junction City, KY track as the winner. The Blairsville, GA driver earned $12,000 for his efforts.

Tim McCreadie led the way in qualifying as he toured the third-mile clay oval in 12.186 seconds to beat out Mike Marlar, Jonathan Davenport, Jimmy Owens and Ricky Thornton, Jr.

Tim McCreadie earned the pole for the feature by beating out Hudson O’Neal, Tanner English, Earl Pearson Jr., Jimmy Owens, and Tyler Erb in the first heat race of the night.

It was Mike Marlar who took the checkered flag in the second heat ahead of Brandon Overton, Ricky Thornton Jr., Brian Shirley, Tommy Bailey, and Zack Dohm.

At the start of the 50-lap feature McCreadie bolted to the lead with Marlar, Davenport, O’Neal and James in his wake. On the second lap, Thornton and Overton moved by James to assume the second and third positions respectively.

McCreadie briefly began to pull away from his pursuers by the fourth lap but Marlar tracked him back down by lap 10 as the leaders began to battle slower traffic.

Davenport moved around Marlar to grab the runner-up position on lap 12. However, a lap 14 caution slowed the pace of the race.

Marlar regained second on the lap 14 restart by passing Davenport while McCreadie continued to lead. For the next several laps, McCreadie, Marlar and Davenport separated themselves from the pack while a hornet’s nest of cars that included O’Neal, Overton, Thornton, Erb, Dohm, and Pearson contested the remaining positions in the top-10.

A lap 27 caution for the slowing car of Shirley regrouped the field just after Marlar had briefly taken the top spot. On that restart, Davenport moved back to second behind McCreadie as Marlar dropped to third in the running order.

Dohm began to after the feature entered it’s second half. Linville then slowed on lap 32 to bring out another yellow flag. During that caution period, Overton’s car slowed to a stop on the front stretch before being pushed to the pit area and out of the race.

As the laps clicked away, Marlar and Davenport continued to exchange second just behind the leading car of McCreadie. Finally, Davenport claimed the spot for good on lap 42 then set off in pursuit of McCreadie.

Davenport closed in and challenged for the lead. Slower traffic came into play with two laps remaining. After taking the white flag, Davenport moved to the high side with McCreadie boxed in behind slower cars. Davenport found momentum on the high side.

As the two leaders roared onto the front stretch, Davenport edged ahead and just did beat McCreadie to the finish line for the win