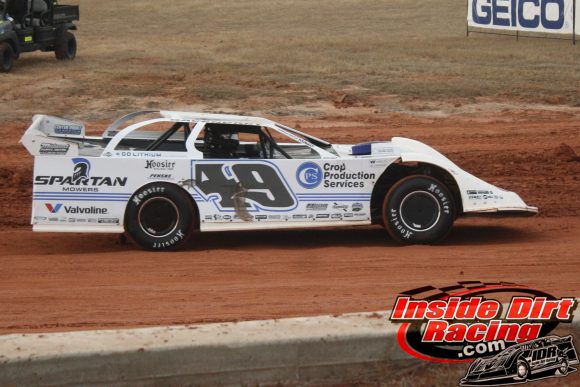 Jonathan Davenport stayed hot with a Monday win at Volusia

The UMP DIRTcar Nationals at Florida’s Volusia Raceway Park commenced the Late Model portion of SpeedWeeks on Monday night. At the end of the night, it was Jonathan Davenport who carried the momentum from his three victories recorded so far during SpeedWeeks and came away from the track located near Daytona Beach with the $7,000 first prize.

Chris Madden paced Group A qualifying with a lap of 17.138 seconds while Jonathan Davenport set the pace in Group B with a time of 16.658 seconds. Shane Clanton topped Group C time-trials as he posted a lap of 16.312 seconds just before Mike Marlar led the way in Group D with a fastest overall mark of 16.293 seconds.

Madden won the first heat of the night ahead of Kyle Bronson, Rick Eckert and Mike Norris while Davenport scored the win in the second preliminary over Tyler Bruening, Dale McDowell and Devin Moran.

Clanton was victorious in the night’s third heat over Scott Bloomquist, Brandon Sheppard and Dennis Erb, Jr. just before David Breazeale bettered Marlar, Timothy Culp and Brandon Overton in the fourth and final heat race of the night.

The redraw placed Davenport on the pole for the night with Breazeale, Madden and Clanton following.

The start of the 30-lap feature saw Davenport bolt to the early lead ahead of Madden, Breazeale, Clanton and Bronson. Clanton swept around Breazeale for third on lap 3 while Bloomquist took fourth away from Bronson on lap 4.

A yellow flag waved on lap 6 when Junghans slowed. On the ensuing restart Clanton shot around Madden to take second while Bloomquist wrested the fourth position from Breazeale. Madden then retook second from Clanton on lap 8.

A caution on lap 12 for a spin by Dennis Erb, Jr. brought about an opportunity for drivers to improve their positions on the upcoming restart. Clanton attempted to do just that as he ducked inside of Madden for second by the No. 44 held the runner-up position. Marlar was able to seize the opportunity as he moved into the top-5.

From that point, the top-5 spaced out until the final few laps when Madden closed in on Davenport and even took a peek to the inside as the cars raced through turns one and two on the final circuit. But Davenport was able to win the race back to the checkered flag.