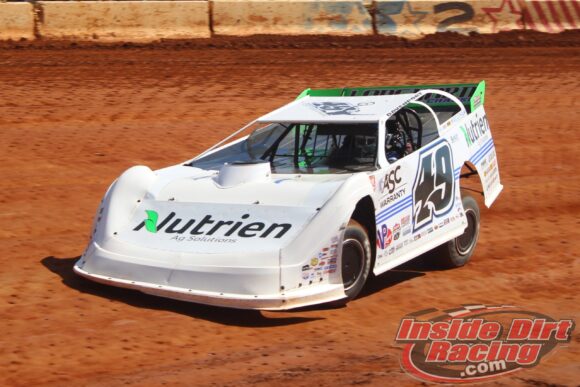 Drivers and teams hit the track for the third time this weekend on Saturday night at the historic Eldora Speedway. The lucrative finale for the Intercontinental Classic, which took the place of this year’s World 100, was won by Jonathan Davenport when Kyle Strickler suffered a flat tire on the last lap. The Blairsville, GA driver took home a check valued at $50,000 for his efforts.

Lineups for the heat races were set based on points earned by drivers during the Thursday and Friday night races.

Kyle Strickler topped Brandon Overton, Darrell Lanigan and Jimmy Owens in the third heat then Chris Ferguson was victorious in the fourth and final heat as the outran Jonathan Davenport, Scott James and Chad Simpson.

Scott Bloomquist was the winner of the first B-main as he beat out Frank Heckenast Jr. and Jerry Bowersock and it was Kent Robinson who bested Hudson O’Neal and Bobby Pierce in the second B-main.

However, O’Neal failed to make weight following the B-main which allowed Kyle Bronson to make the main event.

Ferguson shot to the early lead when the 67-lap feature took the green flag with Strickler, Madden, McDowell and Weiss in his tire tracks. Strickler went to the lead on the second lap when he passed by Ferguson while McDowell took third away from Madden one lap later.

A Madden bobble on lap 4 cost him two positions as Weiss and Richards went by for fourth and fifth. Further back, Overton and Davenport fought over the seventh position.

After a lap 16 caution, Weiss and McDowell emerged as what looked to be two serious threats to Strickler’s dominance as they moved to third and fourth while Ferguson remained in the runner-up spot. Meanwhile, Davenport, who has won three of the last five World 100 features, had made his way into the top-5 by lap 20.

Ferguson fell back in the running order following a lap 29 restart when his car slid out of the racing groove. That moved McDowell and Weiss to the rear spoiler of Strickler’s lead machine.

Weiss took the lead from Strickler on lap 49 but that gain would prove to be short-lived as Strickler went back to the front on the next circuit. From that time, the No. 8 began to pull away from its pursuers.

Weiss showed signs of smoke from his car on lap 55 and dropped from the second position to the pit area. At that time, Davenport moved into contention when Kent Robinson blew an engine to bring out a yellow flag on lap 59.

Strickler looked to have everything under control when McDowell fell off the pace and he pulled away from the then second-running Davenport. But coming to the white flag, Strickler’s car suddenly lost pace. Going into turn one for the final time it became apparent that the leader had a flat right rear tire. Davenport shot by to take the lead and then sailed under the checkered flag to score yet another big Eldora win.