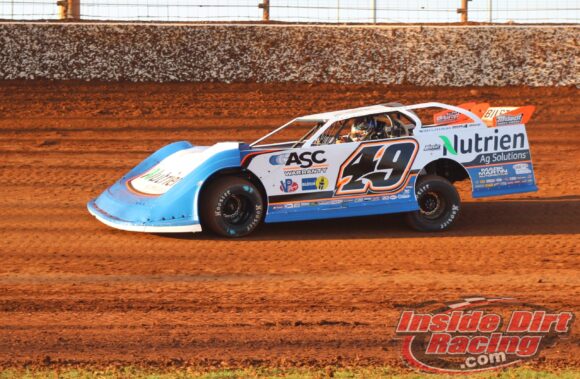 Jonathan Davenport has won all three WWS features so far

The hits just keep on coming. For the third night in a row in the Wild West Shootout it was Jonathan Davenport who came home the winner at Vado Speedway Park. While remaining unbeaten, the driver of the No. 49 machine keeps his hopes of claiming a $300,000 bonus for any driver who can win all six of the scheduled feature races in the 17th annual running of this event alive.

The Longhorn Chassis driver from Blairsville, Georgia earned $10,000 for his efforts at the Vado, New Mexico facility in a race shown live by FloRacing.com.

A total of 46 cars were signed in for competition

Feature Re-cap: At the start of the 30-lap feature Davenport went to the early lead with Sheppard, Pierce, Bagley and Weiss trailing. Weiss wrested fourth away from Bagley and the second lap as the top-4 began to separate from the pack. The leaders then began to encounter slower traffic just 8 laps into the event.

Marlar passed Bagley for fifth on lap 12. At the same time, Davenport began to build an advantage over his pursuers as he sliced through traffic. Pierce closed in to challenge Sheppard for second and would take that position after the two exchanged sliders on lap 14.

As the laps clicked away, Pierce began to close on Davenport looking to make a bid for the race lead. While Pierce was able to get within striking distance, he was never able to move around.

Davenport eventually would take the checkered flag to claim his third win in three attempts.

Questions being answered by Davenport, Sheppard, and Pierce