Home Blogs Jonathan Davenport: “I’m going to drive by him and that’s what we did”

Jonathan Davenport: “I’m going to drive by him and that’s what we did” 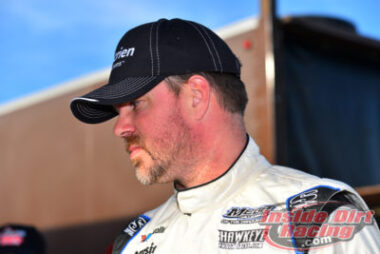 Coming into the 50th annual World 100 at Eldora Speedway on Saturday night there was no doubt that Brandon Overton was the clear favorite. The Evans, Georgia driver had completed a clean sweep of the Dirt Late Model Dream week back in June at the Rossburg, Ohio track by winning both preliminary events he entered as well as both of the crown jewel feature races. He then added the 51st World 100 Globe Trophy to his collection on Thursday night when he claimed that coveted prize.

It was clear on Saturday night that if anyone else was to capture the historic World 100 checkered flag, they would have to go through, or actually around, the No. 76 Wells Motorsports Longhorn Chassis car. As a result, some competitors in that race used the focus on Overton as motivation for their own efforts.

Jonathan Davenport was one of those drivers. The 37-year-old racer who already had three World 100 wins on his  résumé prior to the waving of the green flag on Saturday night had every intention of adding another despite Overton’s recent successes at Eldora.

“Hell yeah, it did,” Davenport told FloRacing.com when asked if all the talk of Overton had motivated him. “I mean, everybody was talking like, ‘You might as well just wreck him’. But I said no, I’m going to drive by him and that’s what we did.”

Davenport wrested the lead away from Overton on a lap 54 restart then led the rest of the way to score the win. The driver of the Lance Landers-owned Longhorn Chassis No. 49 voiced his respect for Overton’s accomplishments during his victory lane interview.

“He’s done a hell of a job, hat’s off to him,” the Fast 49 stated. “Once you get this place figured out you can just start fine tuning and that’s what he did. We were afraid to go too far out of our box because we knew we had a good piece but we wasn’t just quite as good as he was. We just had to keep fine tuning. Even when I was behind him, I couldn’t get down the straightaway like he could. Then when I got in clean air I could finally start using more and more motor. I was being as patient as I could in the race car and we got us another Globe.”

Please consider also reading “How appropriate was it for Scott Bloomquist to lead the 50th World 100 to green?“

As is so often the case in the 100-lap crown jewel races, patience and preparation were the keys to success in the 50th World 100.

“I knew in the back of my mind, they redone the track, I just had to pace myself,” the Blairsville, Georgia native explained. “I knew with these soft tires and the way we’ve got our right rears cut up nowadays that if I could just stay patient, I knew I’d have a better tire at the end. Man, it was tough seeing all those guys drive by me and I fell back a pretty good ways there but I just kind of tried to keep my same pace then after 10 or 15 laps they started coming back to me. It’s awesome when a plan works out.” 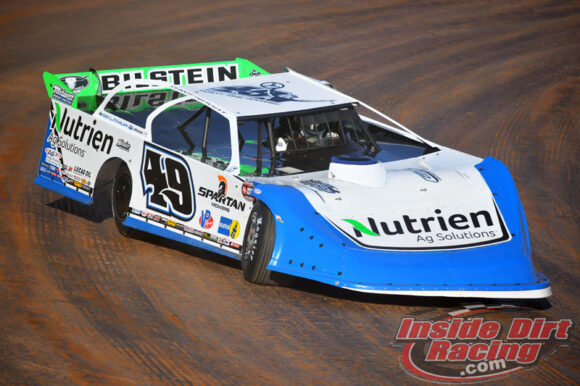 The three-time Lucas Oil Late Model Dirt Series champion who is now tied with Scott Bloomquist and Donnie Moran with four World 100 wins and only two behind Billy Moyer’s total of six was then asked just how much more he could accomplish considering his relatively young age.

“Who knows?” Davenport replied. “This is so hard to do. We come out here now with the format the way it is, everybody gets more laps on the track and they start figuring this place out more. It just keeps getting tougher and tougher. Like I said, Brandon hit on something and everybody was too afraid to try huge leaps and bounds to try to catch him so we finally caught back up to him just a little bit. But who knows, he may have our number at the next race. We got him this time. We’ll see how much longer I can do this. I’m going to race until Lance Landers tells me I can’t race no more or whenever Jason(Durham, crew chief) quits on me. Then after that, we’ll have to start doing something different.”