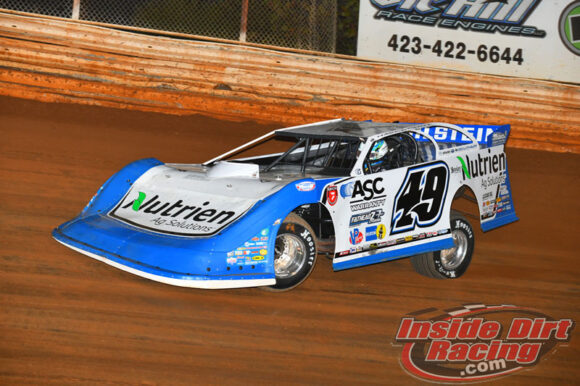 Jonathan Davenport fought off Kyle Larson for his second win

The second round of the Wild West Shootout took to the track at Vado Speedway Park on Sunday night and for the second night in a row the winner was the same. After an intense night of racing, it was Jonathan Davenport who scored the win in the 17th annual running of this mid-winter mini-series after fighting off a determined Kyle Larson over the closing laps.

The Longhorn Chassis driver from Blairsville, Georgia earned $10,000 for his efforts in a race held at the Vado, NM facility and was shown live by FloRacing.com.

A total of 48 cars were signed in for competition.

Feature Re-cap: At the start of the 40-lap feature Davenport went to the race lead ahead of Alberson, Sheppard, Larson and Pierce. Sheppard moved around Alberson for second on the second circuit then Larson took third away from Alberson on the third lap.

Pierce moved by Alberson for fourth on lap 8. Meanwhile, Davenport began to slip away from the pack. Larson grabbed second from Sheppard on lap 12. A yellow flag on lap 13 for Dillard re-set the field.

Sheppard regained second on the lap 13 restart but Larson drove back to the runner-up position one lap later. Larson moved in to challenge Davenport until a caution flag for a mishap involving Shaw waved on lap 16.

Pierce took third from Sheppard on lap 18 while Marlar moved into the top-5. Larson dove to the inside of Davenport issuing a challenge for the race lead on lap 21 but Davenport maintained the advantage. Larson again attempted to get around Davenport on lap 25 but Davenport crossed over to hold the lead.

Traffic became a factor on lap 28 with the lead trio of Davenport, Larson and Pierce engaged in a war. The top-3 exchanged sliders over the closing laps with Davenport continuing to lead. Larson tapped the wall with two to go ultimately allowing Davenport to get away.

Davenport made it two feature wins in a row in New Mexico.