Jonathan Davenport doubles up in Georgia with Lucas win at Rome 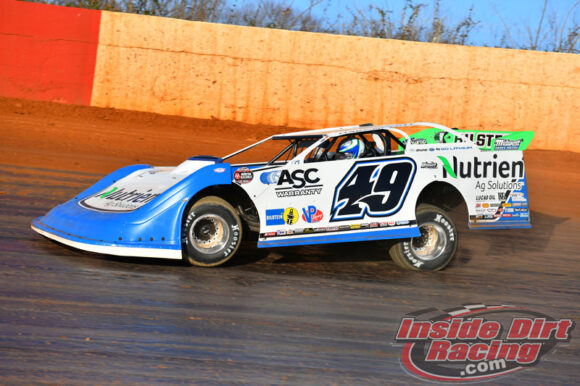 The Lucas Oil Late Model Dirt Series made its way to Rome Speedway on Sunday night to bring the curtain down on a two-race weekend in the Peach State. At the end of a caution plagued night of racing in the Rome Showdown it was Jonathan Davenport who claimed the win and the accolades that go with a trip to victory lane. The Longhorn Chassis driver from Blairsville, Georgia was awarded $10,000 in a race shown live by MavTV Plus.

A total of 26 cars were signed in for competition.

Jimmy Owens would start the feature from the pole by virtue of his win in the first heat race ahead of Chris Madden, Cla Knight, Earl Pearson Jr., Hudson O’Neal and Shane Clanton.

At the start of the 40-lap feature it was Owens who took the early lead ahead of Davenport, McCreadie, Richards and Overton. On the second circuit Overton moved by Richards to claim fourth.

Owens began to slip away from the rest of the field by lap 7 while Overton moved up to challenge McCreadie for third. The No. 76 car finally was able to get around the No. 39 on lap 16 to take the spot.

Christian Hanger slowed with a flat tire on lap 17 to bring out a yellow flag with Owens leading Davenport, Overton, McCreadie and Richards. On the ensuing restart, Bronson jumped from sixth to fourth while McCreadie dropped from fourth to sixth.

The second caution of the night was brought on at the halfway point by Pearson’s flat tire. On this restart, Davenport briefly slid into the lead but Owens quickly crossed over to retake the top spot. Soon after, another yellow flag would wave on lap 25 for O’Neal.

Davenport moved outside of Owens to claim the lead on lap 28 just before a caution flag was displayed for a flat tire on the car of Shane Clanton. On the following restart, Overton grabbed second away from Owens bringing Bronson with him around the former leader of the race.

Bronson wrested the runner-up position away from Overton on lap 31 with Owens and McCreadie lurking. Overton reassumed second on lap 34 with McCreadie climbing to third. But in the end it was Davenport who would win for the second time in as many nights in Georgia as he sailed under the checker flag for the win.