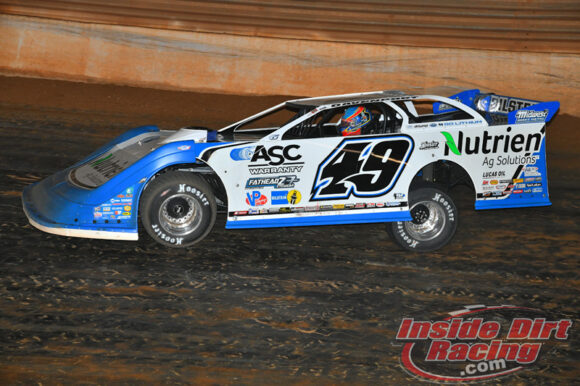 A big payout attracted a star studded field of drivers made their way to the high-banked Tazewell Speedway on Saturday night to contest the Lil Bill Corum Memorial race co-sanctioned by the Schaeffer’s Oil Spring Nationals and the Valvoline Iron-Man Late Model Series. At the end of the night and after a dominating performance, it was Jonathan Davenport who was crowned as the feature winner. The Blairsville, GA driver earned a hefty $21,000 for his efforts.

A total of 35 cars were signed in for competition.

Tyler Erb led the way in Group A qualifying with a lap of 11.420 seconds around the third-mile clay oval to beat out Dakotah Knuckles, Donald McIntosh, Pierce McCarter and Brandon Overton.

Donald McIntosh earned the pole for the feature by winning the first heat race of the night over Tyler Erb, Stormy Scott and Brandon Overton while Dakotah Knuckles outran Pierce McCarter, Travis Fultz and Mike Marlar in the second preliminary.

Jonathan Davenport would start the feature from the outside of the front row by virtue of his victory in the third heat ahead of Zack Mitchell, Dale McDowell and Ryan King just before Kyle Larson took the fourth and final heat by topping Michael Chilton, Jason Tammell and Cory Hedgecock.

Jensen Ford and David Payne were victorious in the two B-main races used to set the remainder of the field for the main event.

Davenport immediately bolted to the front of the field at the start of the 75-lap feature with Knuckles, McIntosh, Larson and Erb in his wake. Larson jumped around McIntosh to claim third on the second lap as the NASCAR star looked to move forward.

A lap 5 caution for a spin by Marlar slowed the action briefly but also allowed Larson to take second way from Knuckles and Erb to wrest fourth away from McIntosh on the restart.

As is often the case at Tazewell when a race goes for a few laps under green, the leader began to encounter slower traffic by lap 11. However, Chilton lost a wheel on lap 14 to bring out another yellow flag.

Davenport’s car had the ability to blast away from the pack on each restart and he used that on lap 14 to quickly build a lead of several car lengths over Larson.

Erb moved in to challenge Knuckles for third on lap 22 and was finally able to take the spot four laps later. Knuckles continued to slide back as he was passed by McDowell and McIntosh on successive laps to drop back into the fifth position.

Davenport continued to control the pace of the race through its middle stages until a caution flag was waved on lap 40 for a flat on Trammell’s top-10 running machine.

On the ensuing restart, Erb moved around Larson to seize the runner-up position as Davenport again drove away. Further back, however, the action was more intense as Owens, who started well back in the order passed by Mitchell and the then lurked just outside the top-5.

With Davenport well ahead, his competitors were left to fight for the remaining positions. Larson got bck around Erb to reclaim second on lap 63 but no one would seriously challenge Devenport as he sailed to the checkered flag.