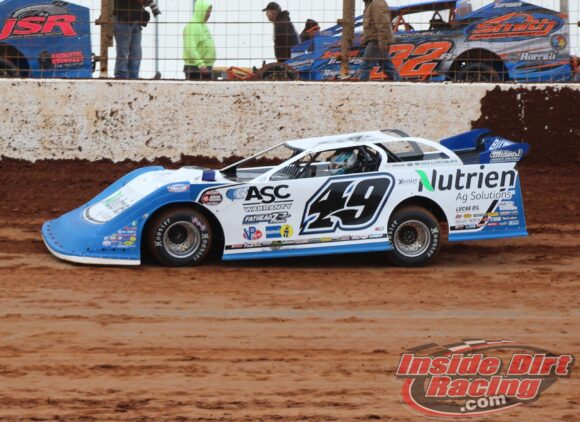 The World of Outlaws Morton Buildings Late Model Series prepared to bring the curtain down on its 2021 campaign on Friday evening as it headed to The Dirt Track at Charlotte for the first of two events. At the end of a racy night, it was Jonathan Davenport who claimed the victory in front of a big crowd at the track located near NASCAR’s Charlotte Motor Speedway. The Longhorn Chassis driver from Blairsville, Georgia earned $12,000 for his efforts.

A total of 48 cars were signed in for competition.

Tim McCreadie led Group A qualifying with a lap of 14.790 seconds around the 4/10 clay oval to beat out Jonathan Davenport, Chris Ferguson, Jimmy Owens and Tyler Erb.

Tim McCreadie was victorious in the night’s first heat after he outran Chris Ferguson, Chris Madden and Tyler Erb then Jonathan Davenport took the second preliminary ahead of Jimmy Owens, Brandon Overton and Kyle Strickler.

Brandon Sheppard finished ahead of Dennis Erb Jr., Josh Richards and Steven Roberts in the third heat just before Ricky Weiss bettered Austin Kirkpatrick, Ryan Gustin and Garrett Smith in the fourth and final heat of the night.

Tyler Bruening and John Blankenship won the two Last Chance Showdown races used to set the remainder of the field for the feature.

When the green flag waved over the 50-lap feature it was Weiss who bolted tot he early lead with Sheppard, Davenport, McCreadie and Ferguson trailing. Kirkpatrick went on the move early as he broke into the top-5 by passing Ferguson on the second lap.

Kirkpatrick continued to march forward as he wrested the fourth position away from McCreadie on lap 3 but McCreadie would take the spot back just a few laps later. However, McCreadie would fall back on lap 10 as both Kirkpatrick and Ferguson would move around to claim fourth and fifth respectively.

At the front of the field, Sheppard and Davenport closed in on Weiss on lap 11 with Sheppard taking the lead of the race one lap later. Then, a lap 13 caution for the slowing car of Blankenship would briefly put the action on hold.

Garrett Smith slowed to bring out a second yellow flag on lap 16 as Sheppard continued to lead Weiss and Davenport.

McCreadie slowed with a flat tire to bring out another caution on lap 18. On that ensuing restart, Davenport moved by Weiss to claim second in the running order while Tyler Erb moved up tp fourth.

A lap 19 caution for the slowing car of top-5 running Kirkpatrick proved to the last yellow flag of the night. From that point, the swapping of positions because the norm as drivers were able to employ multiple lanes around the track.

Dennis Erb Jr. cracked the top-5 on lap 20 while Tyler Erb continued to move up by passing Weiss for third. Further ahead, Davenport closed in to challenge Sheppard for the lead as those two drivers then began to battle slower traffic.

A lap 31 bobble by Sheppard opened the door for Davenport as the No. 49 car darter around the former leader. Once out front, Davenport controlled the pace of the race and was able to drive away.

Meanwhile the battle raged on for other positions within the top-5 as Tyler Erb, Weiss and Dennis Erb Jr. circulated around the track in tight formation. Dennis Erb Jr. would eventually pass by Weiss to stake claim to fourth. But the race belonged to Davenport as he eventually sailed under the checkered flag to claim victory.