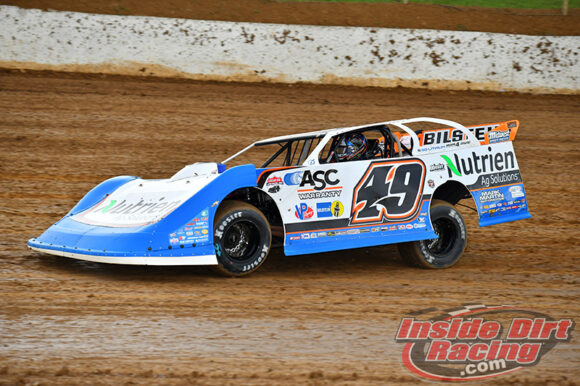 Jonathan Davenport scored yet another big win at Eldora

Eldora Speedway hosted the most prestigious Dirt Late Model race in the sport on Saturday night as the 52nd World 100 took place. At the end of the night, it was Jonathan Davenport who claimed his fifth career win in the sport’s marquee event adding yet another lucrative win during the 2022 season.

The Longhorn Chassis driver from Blairsville, Georgia was awarded $55,000 and the coveted Globe Trophy for his efforts on the track located in Rossburg, Ohio in a race shown live by FloRacing.com.

A total of 107 cars were signed in for competition

Heat race lineups were set from a points system that was implemented for the racing action that took place at Eldora on Thursday and Friday. See those heat race lineups here.

Feature Re-cap: At the start of the 100-lap feature, it was Davenport who bolted to the early lead with Owens, Overton, Babb and Madden trailing. Madden jumped up to fourth on the second circuit when he got around Babb.

By the fourth lap, Davenport had already built a lead of more than one second over Owens, Overton and Madden. Overton and Madden overtook Owens for second and third respectively on lap 13. Babb continued to run fifth ahead of Bronson, Dohm, Erb, Pearson and Thornton.

A lap 17 caution on lap 17 for debris, apparently from the Hughes car, on the race track erased Davenport’s big lead. That yellow flag provided a reprieve from slower traffic for the leaders.

A second caution came out one lap after the lap 17 restart for a multi-car crash involving Marlar, Zeigler, Hughes, Smith and Stormy Scott. Under that caution, Ferguson was pushed into the pit area with damage. On the restart, Davenport continued to lead ahead of Overton, Madden, Owens and Dohm.

Davenport maintained control of the race as he pulled out to a lead of trust over one second until a lap 27 caution for the slowing car of Bloomquist again took away his advantage over the field. Thornton began to move forward when he dropped into the top-5 on the restart.

Madden closed in on Overton to battle for second on lap 30 but Overton held off the challenge while Davenport led by more than two seconds. But again, a yellow flag on lap 34 would erase the leader’s margin when Rice slowed.

Yellow fever continued to plague the feature race as Babb slowed on lap 37. On the restart, Overton made a strong run on the outside and took the lead away from Davenport. However, a lap 40 caution interrupted that fight for the lead when Bloomquist once again slowed.

Overton kept the lead ahead of Davenport, Madden, McCreadie and Owens after the restart. The top-5 runners would eventually space out by about one second each as they approached the tail of the field before another caution again spared the leaders from slower traffic on lap 54. This time, it was Smith who spun to slow the action.

On the ensuing restart, Davenport regained the top spot while O’Neal made a big move to take fourth. Bronson tagged the outside wall on lap 56 to bring out another yellow flag.

Just after the restart, Davenport returned to his old ways by stretching out his lead to more than two seconds. Madden moved in to challenge Overton for second and was briefly able to take the position but Overton would eventually keep the spot with Madden continuing to harass.

Strickler slowed to produce another yellow flag on lap 66. McCreadie and O’Neal battled for fourth when green flag action resumed while McDowell made his presence known by moving well into the top-10.

In clean air, Davenport was turning laps significantly faster than his closest challengers at the three-quarters mark. With just under 20 laps to go, Pierce broke into the top-5 as his car picked up pace on the outside. The final 34 laps ran without a caution which allowed the No. 49 to pull out to a lead of more than five seconds.

It was Davenport’s fifth career win over the last seven years in the prestigious event.

“We wasn’t great to start off with and I didn’t think we would be,” Davenport stated in victory lane. “But as the tires kind of quit, our car got better and better. When Brandon got by me, that definitely worried me. I knew I had to get up on the wheel on a restart. I hope I give him plenty of room down there, I didn’t slide all the way across but I was trying to block a little air and that way I could get down to turn three first.”