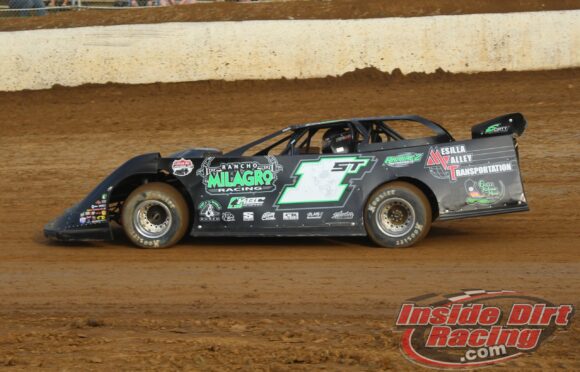 Johnny Scott was the winner of the first feature on Wednesday

The Dirt Late Model world assembled at one of the sport’s most revered venues on Wednesday night for preliminary events that will lead into the 51st World 100 that will be held on Thursday evening. The field was split into an A Group and a B Group on Wednesday to contest a pair of $10,000-to-win features. At the end of the first night of competition, it was Johnny Scott who captured the Group A main event. The Longhorn Chassis driver from New Mexico enjoyed the honor of celebrating on Eldora’s famed victory lane stage.

Qualifying, heat race results, and the feature finish from each Group award points for the drivers that go toward setting the heat race lineups for Thursday’s World 100 event.

A combined total of 80 cars were signed in for competition.

At the start of the 25-lap feature it was Hoffman who took the initial lead with Johnny Scott, Davenport, Sheppard and Gustin following. On the second circuit, Scott moved to the outside and rolled by Hoffman to take the race lead.

Further back, Pierce entered the top-5 by passing Gustin on lap 3. Soon after, Madden closed in to challenge Gustin for sixth. As Scott began to pull away from Hoffman, Davenport, Sheppard and Pierce found themselves in a three-car fight for positions 3-5.

Scott encountered traffic by lap 11 in a feature that would run caution free.

Davenport closed in on Hoffman as those two mixed it up by exchanging the second spot twice before Hoffman regained the position. Then, Sheppard pulled up on the rear spoiler of Davenport to contest the third spot. On lap 15, Sheppard executed the pass to take that position away from Davenport.

Pierce then engaged in a fight with Davenport for fourth, which he would eventually take.

But up ahead, Scott had the race under control as he would eventually cruise under the checkered flag to score his biggest career victory.