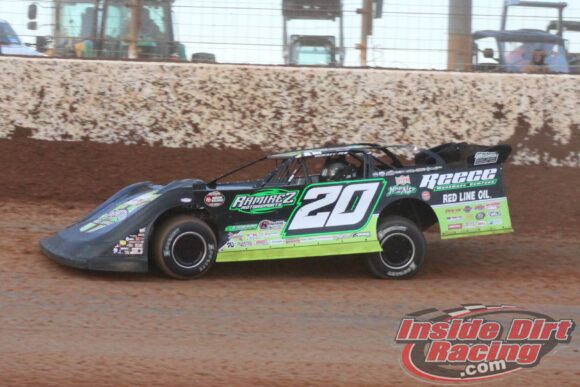 The World of Outlaws Late Model Series staged its final race of the 2019 season on Saturday night as part of the World Finals. After a full evening of racing action had played out it was Jimmy Owens who left The Dirt Track at Charlotte with the trophy and the winners payout of $12,000 after he took the lead early then held off a late race challenge.

Brandon Sheppard had already secured the WoO Late Models title prior to the beginning of the two-race weekend.

Qualifying for the weekend’s races had been done on Thursday night and it was Josh Richards who led the way in Group A qualifying when he posted a time of 14.750 seconds around the 4/10 clay oval. That lap beat out Ross Bailes, Dale McDowell, Logan Roberson and John Blankenship.

Jimmy Owens topped the leaderboard in Group B time-trials with a lap of 14.926 seconds to outpace Jonathan Davenport, Shane Clanton, Mike Marlar and Kyle Hardy.

Josh Richards earned a place in the WoO Late Models redraw by winning the first heat race of the night ahead of Chris Madden and Chris Ferguson while John Blankenship bested Ross Bailes and Brandon Sheppard in the second preliminary of the evening.

The WoO Late Models redraw placed Clanton on the pole with Blankenship, Davenport, Owens, Richards and Weiss flanking him.

At the start of the 50-lap feature it was Blankenship who would go to the early lead with Clanton, Owens and Davenport in his tire tracks. Owens began moving forward on lap 4 when he took the runner-up position away from Clanton.

Following a lap 7 caution for Birkhofer, Owens made a bid for the lead on the restart. After he and Blankenship ran side-by-side for two circuits, the No. 20 took the top spot. Then on lap 11 Davenport moved by Blankenship  to grab second and set off in pursuit of Owens.

Following a lap 23 restart the cars of Weiss and Madden charged around Blankenship to take the third and fourth positions. That was soon followed by a fierce fight between those two drivers for third that would ultimately be interrupted by a caution on lap 33.

The feature ran green for the remainder of the laps. Weiss got by Davenport for second on lap 34 while McDowell moved around Davenport to claim third three laps later.

For several laps, Owens would hold a relatively comfortable advantage until slower traffic began to impede his progress. Weiss closed to the rear spoiler of the Owens machine but the ‘Newport Nightmare’ was up to the challenge and held back the Canadian.