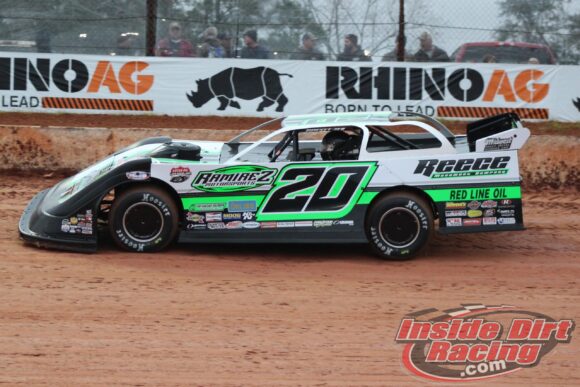 Once again the Dirt Late Model world focused its attention on a Super Late Model show designed primarily for a pay-per-view audience. Magnolia Motor Speedway in Columbus, Mississippi played host to the Magnolia Mayhem 40 on Friday night(originally slated for Thursday but was postponed due to rain). Former Lucas Oil Late Model Dirt Series champion Jimmy Owens remained hot even after the shutdown due to the coronavirus as he came away with the $5,000 first prize at the end of the night.

Jimmy Owens led the way in Group A qualifying by posting a lap of 13.235 seconds around the 3/8 mile clay oval to beat out Rusty Schlenk, Payton Looney, Brian Rickman and Neil Baggett.

Rick Rickman was quickest in Group B time-trails with a time of 13.183 seconds to better the efforts of Michael Arnold, Timothy Culp, Logan Martin and Dalton Cook.

Payton Looney took the win in the first heat race of the night ahead of Jimmy Owens, Ashton Winger and Michael Page while Rusty Schlenk was the victor in the second preliminary over Brian Rickman, Billy Moyer, Jr. and Cade Dillard.

It was Timothy Culp who took the checkered flag in the third heat by beating out Kyle Bronson, Rick Rickman and Darrell Lanigan then Michael Arnold won the fourth and final heat as he topped Dennis Erb, Jr., Logan Martin and Mason Oberkramer.

Neil Baggett and Jonathan Davenport won the two B-main races used to set the remainder of the starting grid for the main event.

At the start of the 40-lap feature it was, Looney who went to the early lead with Culp, Owens and Rickman trailing. Owens immediately went to work as he grabbed second away from Culp as the cars completed the opening lap.

Owens then charged the lead of the race from his fifth starting spot at the end of the second circuit. Further back, Winger, Dennis Erb, Jr. and Bronson fought over the final spot in the top-5 running order.

Owens began to pull away from the pack as the Newport, TN driver built a straightaway advantage by the end of lap 6.

Erb powered his way up to the third position on a lap 9 restart as he moved around Culp to take the position. Then on lap 11 Erb move around Looney to assume the runner-up position behind Owens.

The top-3 of Owens, Erb and Culp turned blistering laps as they separated from their pursuers on the lightning fast track through the middle section of the feature. The main event would run caution-free over the course of its second half which allowed the leaders to break away.

Owens sliced through slower traffic for the remainder of the event to eventual sail under the checkered flag and claim the victory.