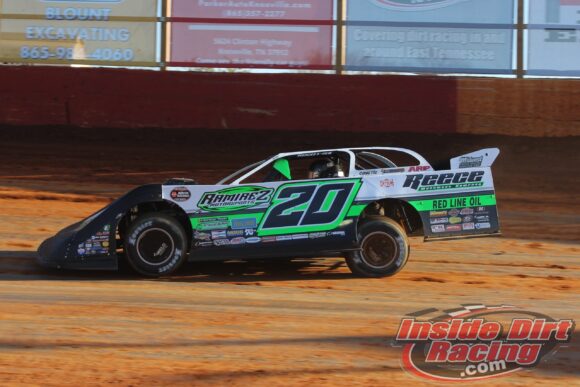 The World of Outlaws Morton Buildings Late Model Series roared into the Cherokee Speedway on Friday night to contest a pair of feature races in the Rock Gault Memorial that would serve as a prelude to Saturday night’s big show. At the end of the night in the first of the twin bill features, it was Jimmy Owens who stood tall in victory lane at the Gaffney, SC facility. The Newport, TN driver earned $5,000 for his triumph in a race that was shown live by DirtVision.com.

Fresh off his win in the Bristol Dirt Nationals at the Bristol Motor Speedway, it was Chris Ferguson who would lead qualifying for the A Feature with a lap of 14.867 seconds around the 4/10 mile clay oval topping Jimmy Owens, Chris Madden, Zack Mitchell and Daulton Wilson.

A total of 43 cars were entered into both features on Friday night.

At the start of the 25-lap feature, Madden went to the early lead with Owens, Ferguson, Ivey and Strickler following. Ferguson blasted by Owens for second on the second circuit then Owens returned the favor one lap later after Ferguson got into the back of Madden’s car in an attempt to grab the lead.

Strickler and Ivey also moved around Ferguson with damage on the left front of the No. 22 machine.

Owens moved up to challenge Madden of the lead just before Strickler moved in to make it a three-way battle for the top spot. Owens and Strickler went side-by-side for second then both moved by the Madden car which showed signs of right rear damage following the early contact with Ferguson.

Owens broke free from his fight with Strickler on lap 10 and stormed to the race lead leaving Madden and Strickler to battle behind him.

A lap 15 caution for the slowing car of Ricky Weiss provided a brief opportunity for the drivers to regroup. But just after the restart, the heated action resumed as Strickler and Madden swapped the second position as Owens slipped away just before another yellow flag waved on lap 18.

Davenport made his presence known on the restart as he entered the top-5 in the fourth spot. As the fierce battling continued, the third-running car of Strickler suffered a flat tire bringing out another caution.

Davenport again used a restart to move up as he bolted to second.

A final yellow flag waved on lap 23. Following the single-file restart, Owens outran the pack in the race back to the checkered flag.