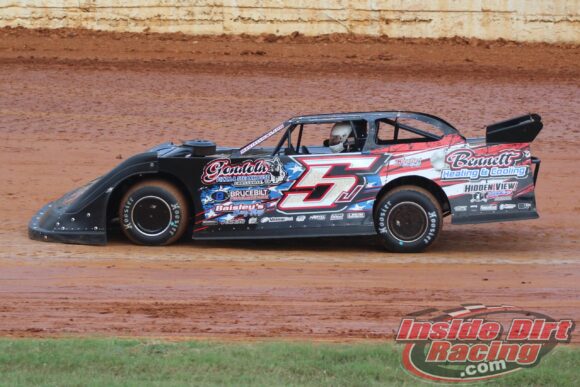 Jesse Lowe made it two wins for the weekend

Just as was the case on Thursday night in Crossville, a 604 Crate Late Model race accompanied the Schaeffer’s Oil Southern Nationals on Friday night at 411 Motor Speedway. And just as had been the case in Crossville, Jesse Lowe came away with the win in that division following a dominated performance. The Crossville, TN driver picked up $1,200 for his efforts.

There were no heat races in this class.

At the start of the 25-lap feature Lowe darted to the early lead with Miller, Ballenger, Trevor Sise, Cardwell and Zach Sise trailing in his wake. Cardwell moved forward on lap 2 by passing Trevor Sise for fourth which then opened the door for Zach Sise to take fifth away from his brother.

As the battles played out behind him, Lowe went about the business of leading the race and pulling away from his competition. On lap 7, Trevor Sise continued to fade as Henry moved around for sixth in the running order.

A lap 9 caution for a spin by John Llewellyn allowed the field to bunch up behind Lowe. But that did not deter the eventual race winner as the No. 5J machine again pulled away from his pursuers once the racing action went back to green flag conditions.

However, the restart did allow Ballenger to take second from Miller while Cardwell followed suit and drove by the pole sitter for third.

But over the closing laps it was all Jesse Lowe as he eventually cruised under the checkered flag to earn the win.