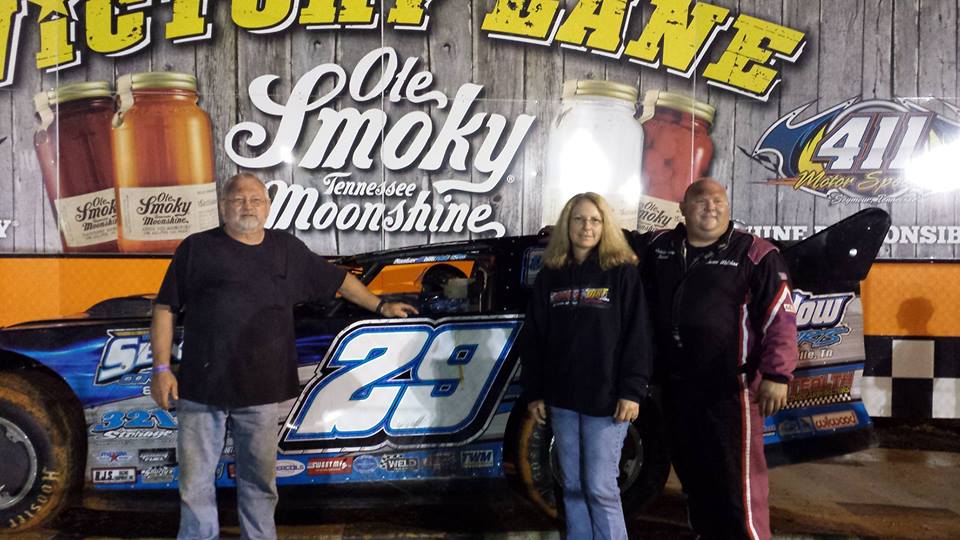 There was a lot of waiting around and then a lot of hurrying up on Saturday evening at the 411 Motor Speedway in Seymour, Tenn. The waiting came when rain delayed the start of the night’s racing activities for almost three hours. Then the hurrying was brought on as track officials fought valiantly to beat the 11:00pm curfew placed on the track by Sevier County.

It was announced in the drivers meeting prior to the rain delay that there would be no qualifying for any of the classes, including the NeSmith Crate Late Models. Rather, drivers would line up for heat races based on the number they drew when they signed in. However, the heat races were eventually scraped because of the long weather delay and the decision was made to line the features for all classes up based on the numbers drawn when drivers signed in for competition.

It must be noted here that in a second drivers meeting held after the rain had stopped, track owner Mitch McCarter polled drivers as to whether they would rather race under the abbreviated schedule or load up and call it a night. Overwhelmingly, the drivers opted to race.

Current 411 Late Model points leader Adam Beeler started from the pole position in the main event with Jason Welshan lined up on the outside of the front row.

On the initial attempt at a start, 3rd starting Scott Ward spun in turn three and slammed the outside retaining wall to bring out a caution and require a second attempt to go green.

On the second start, one of the front running cars slipped high in turns one and two which set off an according effect type situation in which Mack McCarter and Brad Coffey ultimately found their cars literally locked together in turn four.

Once the 20-lap feature finally got underway, Welshan and 4th starting Cory Hedgecock were able to get around Beeler to claim the top-2 positions. In the meantime, Jake Teague stalked the lead trio from a few car lengths back.

But it was when the lead cars caught the tail of the field that the intensity really picked up. Welshan bobbled at the entrance of turn one while lapping a slower car on the fifth lap which allowed Hedgecock to briefly draw alongside in a fight for the lead. Teague moved around Beeler to claim third as the leaders continued to battle among slower cars.

On lap 13, both Welshan and Hedgecock tangled with a slower car as they raced through turns one and two. Their brief hold up allowed Teague, Beeler and Ryan King to close the gap.

After that contact with the lapped car, Hedgecock appeared to lose pace. Teague moved around for second on lap 15 as Beeler closed in looking for third. However, Teague almost saw his good run turn sour when he too got involved with a slower car with two laps remaining.

That near miss for Teague resulted in a caution which set up a final dash to the finish.

On the ensuing restart, Hedgecock and Beeler bumped in turn one while racing for third. Beeler, King and Brad Coffey were collected in the resulting spin. While those three cars sat locked together and waiting to be separated, Hedgecock turned his car down the track to pull alongside Beeler and gesture in Beeler’s direction. After the locked cars were pulled apart and sent on their way, Hedgecock again drove alongside Beeler and the two began banging as the field circulated under caution.

Track officials warned Hedgecock to cease. When he did not, he was ordered by Race Director Joe Byrd to park his car.

Once the green flag waved again, Welshan bolted away to claim the victory over Teague, Beeler, King and Marty Calloway.

*After the night’s racing was completed, 411 Motor Speedway owner Mitch McCarter offered the following message on Twitter- “Nesmith Late Models will Qualify and Heat Race for the remainder of the 2014 season. A Top 6 Dash will be implemented.”