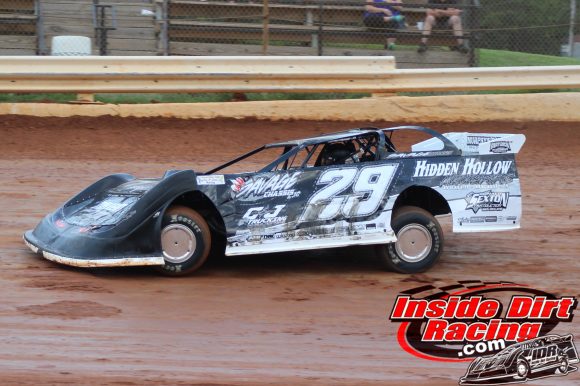 Boyd’s Speedway hosted the Southern Nationals on Tuesday night and along with that also staged racing in its own Crate Late Model division. Jason Welshan emerged as the winner after turning in what proved to be a dominating performance.

Andrew Littleton and Eli Beets won the two B-main races used to set the remainder of the starting grid for the main event.

Welshan used the outside front row starting spot to his advantage when the green flag waved over the 25-lap feature with Harris, Johnson, Parkhurst and Seawright in his tire tracks. Seawright looked to move forward early on as he passed by Parkhurst to gain the fourth position as the cars worked though the second circuit around the Chattanooga-area facility.

Johnson also went on the move early as he swept around Harris to claim the runner-up spot on lap 5. Meanwhile, Hunter and Brindle engaged in a side-by-side contest for position just outside the top-5.

Welshan built a relatively comfortable lead until he began to encounter slower traffic on lap 8 which allowed Johnson to close in and get alongside his quarter-panel briefly. However, a caution flag would cool the action on lap 10 when a car stopped on track.

Welshan again built a seemingly comfortable margin on the clear track during the races middle stages with Johnson, Harris and the battle between Parkhurst and Seawright attempting to keep pace.

A pivotal moment in the race occurred on lap 19 when a slower car spun at the exit of turn four just in front of the leaders. Welshan managed to avert disaster but the second-running Johnson was not so lucky as he found his lane completely blocked when he arrived at the scene. The No. 85 cars had to be retired with significant nose damage.

Following what proved to be the night’s final restart, Brindle moved into the top-5 as he passed by Hindman to gain fifth. However, it was Welshan who would drive away from the pack and sail under the checkered flag for the win.