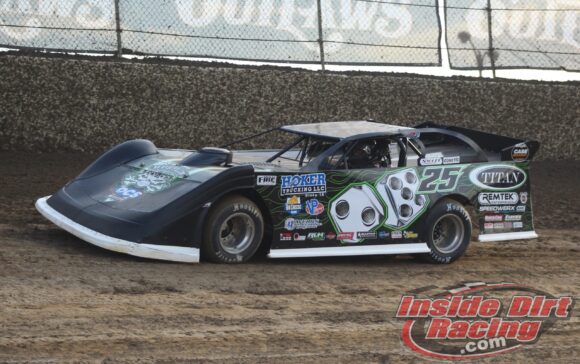 On the first night of a three-race run for the World of Outlaws CASE Construction Late Model Series at the Davenport Speedway it was Jason Feger who claimed the win by fighting off Bobby Pierce late in the going.

The Longhorn Chassis driver from Bloomington, Illinois earned $10,000 for his win on the quarter-mile track located in Davenport, Iowa in a race shown live by DirtVision.com.

A total of 38 cars were signed in for competition

Feature Re-cap: When the 40-lap feature took the green flag it was Feger who outdueled Winger for the early race lead with Moran, Robinson and Moyer trailing. A lap 2 caution for a spin by Josh Richards briefly slowed the pace.

On the restart, Moyer took fourth from Robinson then Pierce followed through quickly as well. A yellow and then a red flag was displayed to the field after the completion of the fifth lap when Chad Simpson crashed hard coming off of turn four.

Moran moved into the runner-up spot behind Feger on the lap 5 restart as Gustin blasted all the way up to fourth. Further back, a fierce battle between English, Babb and Heckenast was taking place for positions in the back half of the top-10 as Feger, Moran and Winger continued to lead the way.

Moran pulled up and made a bid for the lead on lap 17 but Feger was able to hold the spot. Meanwhile, English and Pierce were fighting for position in the top-5.

Gustin moved around Winger for third on lap 23 as Moran continued to harass Feger for the top spot.

Moran’s efforts paid off on lap 29 when he passed by Feger for the race lead. At the same time, Pierce moved by Winger to grab fourth. English was also able to move around Winger to claim fifth.

Top-5 running Gustin blew a right rear tire on lap 34 to bring out a caution. During that same caution, leader Moran pulled off track with a flat right rear as well. When racing action resumed, Feger led Pierce, English, Winger and Moyer.

Pierce closed in and rode on the rear spoiler of Feger but in the end it was Jason Feger who would fight off the challenge to claim the win.

“It’s hard to say who’s the best here, it’s either Bobby(Pierce) or Devin(Moran),” Feger told DirtVision.com in his victory lane interview. “Man, I felt like I had a flat tire in those last couple of laps. I don’t know if it was going down but it had to be pretty much chunked out. That’s what’s weird about this place, it’s really hard on tires. It’s hard to know how to manage them. I was out front and i was like, ‘You know, I got to this point so I’m going to give it all I’ve got’. I don’t know if that’s why Devin had a flat there. That’s bad luck for him but Bobby raced me clean there. It just feels good to finally get a win.”