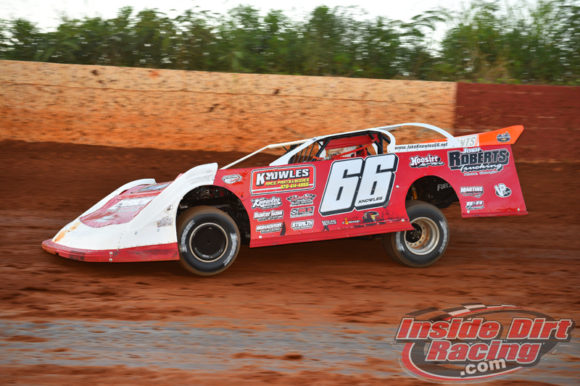 Jake Knowles led all the way

It’s been quite a season so far in 2019 for Georgia driver Jake Knowles. Wins and top-5 finishes throughout the year had placed him at the top of of the Durrence Layne Chevrolet Late Model Series standings coming into Friday night’s event at Smoky Mountain Speedway and the driver who also posted a second place result in this summer’s Southern Nationals mini-series added to his advantage in the points chase for Crate Late Model cars. The No. 66 team took home the winner’s trophy and the $2,000 first prize following a performance that saw him lead from green flag to checkered.

Knowles began his night by demonstrating that he would be a force to reckon with as he set fast time in qualifying by turning a lap in 17.675 seconds around the 4/10 mile clay oval. That effort beat out Michael Courtney, Jake Rainey, Brandon Williams, Cory Hedgecock and Cruz Skinner. Those six drivers were locked into the feature via time-trials.

Seth Wimpey and Grant Garrison were the winners of the two B-main races used to set the remainder of the starting grid.

Knowles immediately went to the front at the start of the 30-lap feature with Williams, Rainey, Hedgecock and Courtney trailing. It didn’t take long for Knowles to assert himself as the No. 66 machine began to pull away from the pack by the end of the third lap. 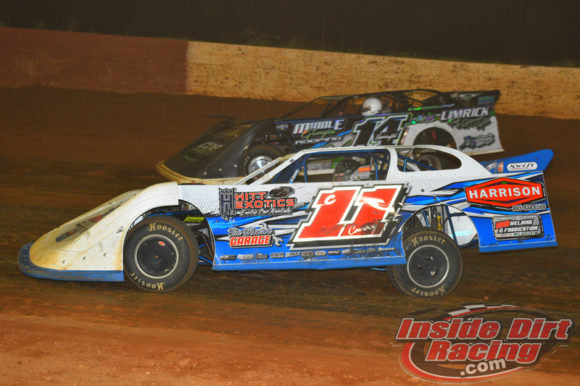 Michael Courtney(c11) and Will Herrington mix it up for position

Skinner moved into the top-5 in the running order when he passed by Courtney for the fifth position on lap 5. Hedgecock and Skinner moved around Rainey on lap 10 and 13 respectively to take the third and fourth positions on the leader board as Knowles continued to show the way.

The race’s only caution came on lap 20 when Joe Denby suffered a flat tire causing other drivers to take evasive action to avoid his slowing machine. Rainey spun and hit the inside barrier at the entrance of turn one.

On the restart, Williams made a bid for the lead to the inside of Knowles and the two cars raced in close formation for a couple of laps before Knowles was able to reassert his leadership of the race. Soon afterward, Hedgecock would move around Williams to claim the runner-up spot.

Will Herrington began to move forward over the final ten circuits as he grabbed fourth away from Courtney on lap 23.

But the race for the win ultimately came down to Knowles and Hedgecock as Hedgecock closed right to the rear spoiler of the Knowles cars as the laps clicked away. However, Knowles held on to secure the victory. 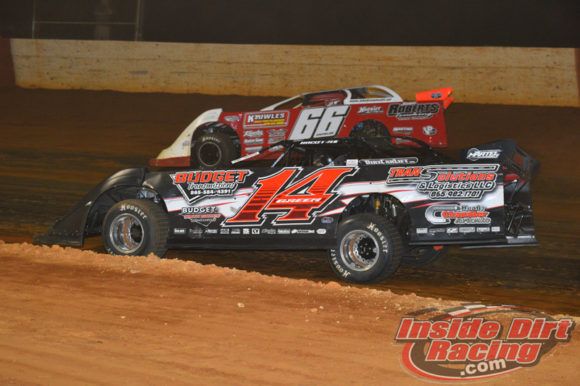 Cory Hedgecock(14) closed in on Knowles late in the race