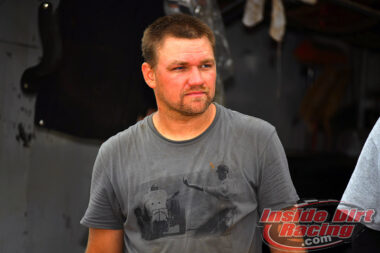 Things couldn’t have gone much better for Jake Knowles during the 2019 version of the Schaeffer’s Oil Southern Nationals. The Rome, GA racer won the feature event at Tri-County Race Track in Brasstown, NC after a classic battle with Kenny Collins then went on to finish second in the overall series standings to Brandon Overton. But unfortunately, what goes up sometimes comes down.

The 2020 version of the Southern Nationals did not go nearly so well for the 34-year-old driver. Bad luck struck early on and seemed to keep striking throughout the 12-race tour. And with the level of competition being what it was, any poor results at all were sure to doom the hopes of those who planned to stick with the series throughout its entire schedule.

Ultimately, Knowles finished seventh in the overall standings with a best finish of fifth at Tri-County.

“We had high expectations after last year but there’s a lot of good drivers this year on this deal,” Knowles explained in an interview with InsideDirtRacing.com. “We’ve really been struggling all year on some stuff. We were hoping to get better in these two weeks and we’ve got a little better. But man, I’ll tell you it’s just been bad luck one night after another. If it could go wrong, it’s went wrong. Somebody wrecks and we get into it. We were running fifth the other night and had a flat. We’ve just had a lot of bad luck. We’re getting better, but we just can’t knock this luck right now.”

Continuing on can be difficult when fortunes have turned the wrong way. Knowles credits his family and crew for keeping him focused and on track.

“I’ve got a great group of people behind me,” the 34-year-old pointed out. “They just keep telling I’ve got to keep plugging and that it’s got to change. Lately I’ve been wondering if it’s going to change but we’ve been racing long enough that we know you have years like this. You can’t quit, you’ve just got to keep going. Hopefully it will change eventually.” 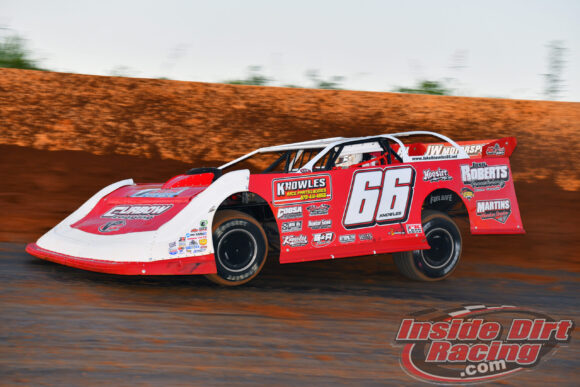 The No. 66 Longhorn of Jake Knowles

Knowles has proven in the past that he and his team are capable of contending for feature wins and championships. The Longhorn Chassis driver feels certain that things will eventually turn back in his favor.

“We know we can win races and we’ve got good equipment,” the 2019 Crate Racin’ USA Dirt Late Model Series champion stated. “It’s just that when things are going bad it seems like they go real bad but when things go good they go real good. We’ve just got to ride this wave for a little while and hopefully it change around.”

The heat of summer in the southeastern corner of the United States combined with grueling travel make the Southern Nationals a difficult proposition under the best of circumstances. But when things turn sour, those outside factors become magnified.

But on a positive note, former racer Wade Knowles was able to accompany his son on this year’s journey to help with some key aspects of running this tour.

“When you’re running good and having good luck it seems like everything’s good,” Knowles said. “But we went five nights straight and didn’t go to bed until six in the morning because we were having to beat body parts out or replace suspension parts. Luckily this year I’ve had my dad with me so he can drive the truck some. Last year I had to drive the truck every mile we made. He’s been able to drive some this year so I can get some rest.”

The closures of various businesses around the country resulting from the coronavirus pandemic made travel difficult for everyone involved with this year’s Southern Nationals. But Knowles and his team were able to combat those difficulties along the way. However, the racing shutdowns have impacted him in another way.

“We mainly do everything out of our truck and don’t have to stop anywhere,” he explained. “Where it’s affected us a lot is in our parts business(Knowles Race Parts & Bodies). Nobody has been racing much around the house so we’ve been struggling on the business side of it and the racing side of it. 2020 hasn’t been that good to us.”