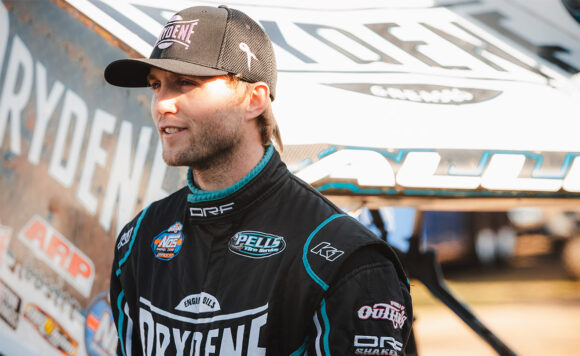 CONCORD, NC — Dec. 11, 2020 — Jacob Allen meandered his way to the group of drivers waiting to take part in the DIRTVision Fast Pass Dash draw at Huset’s Speedway. Upon joining them, Kyle Larson turned to Allen and asked, “Have you made every Dash? I feel like I always see you here.” To which Allen responded with his iconic enthusiastic smile and chuckle.

He made about half the Dashes in a career World of Outlaws NOS Energy Drink Sprint Car Series season, which saw the Hanover, PA, driver claim his first Series win after 358 starts. He also added single-season career highs of 18 top-10s, 79 laps led, and an eighth-place finish in points.

This offseason, he’s focused on entering next year prepared to build off that success when the 2021 season kicks off Feb. 5-7 at Volusia Speedway Park for the 50th DIRTcar Nationals.

“I think I’ll have a great year,” Allen said. “I had a lot of fun this season. I feel good about myself. I look back at all the years on the road and see where I’ve slacked in some ways. I just feel focused and feel determined to do a lot better all the time. Whatever that brings me, it is what it’ll be. I want to put myself in those good positions continuously. I don’t want to be on a stretch of only 10 races that you’re doing good. I want to be in the same caliber of like Sheldon (Haudenschild) and Logan (Schuchart) and being there all the time.”

Since joining the tour full-time in 2014, the question everyone asked, and the question he asked himself, was, “when will the first win come?” Over time, to Allen, that question went from “when” to “if,” even doubting his interest in racing. But with a self-improved attitude and new level of focus this year, he negated the question by winning at Dodge City Raceway Park.

Now, the question is “what’s next?”

“Definitely more wins and try to be more consistent, being in the top-five,” Allen said about his 2021 expectations. “I don’t really ever think about goals. Obviously, I want to finish as high as I can in points. I guess I’m just trying to build off this season.”

This year he established new habits to help better himself. At the track, he focused more on taking notes and watching the track to improve his setups, and off the track he focused on taking care of himself, working out more, and staying mentally positive.

During the off-season, he spends his mornings working out, his days at the shop with the Shark Racing crew, getting cars ready for next season, and his evenings digging through the DIRTVision Vault, studying previous races and those who had success at them.

“I think if you start watching them continuously, you start to pick up on things and see things those people you’re watching do differently than other people and you can learn a lot from it,” Allen said.

Along with Allen improving himself as a driver, Shark Racing, with continued support from Drydene, continues to grow as a team. His Hall of Fame father, and car owner, Bobby Allen said the team is now at a point where Allen and teammate Logan Schuchart can have equal motor packages year-round.

“When we pull into a racetrack, I don’t think anyone has better motors than we do,” said Bobby Allen, who gets his motors from Newman’s Racing Engines. “And it wasn’t that way until this year. We had good motors, but you could run them part of the year, maybe three-quarters of the way. This year and next year we can be even with anybody at any given time. Logan and Jacob both.”

With confidence and power behind him, Allen is ready to go after another career season in 2021.

“I learned so much this year and I feel like I have a lot to build on,” Allen said. “I think I’m taking all the right steps to have an even better season. I’m excited for it. I’m focused and really looking forward to racing again.”