Home Blogs Is this the time when Brandon Sheppard goes on a dominant run?

Is this the time when Brandon Sheppard goes on a dominant run? 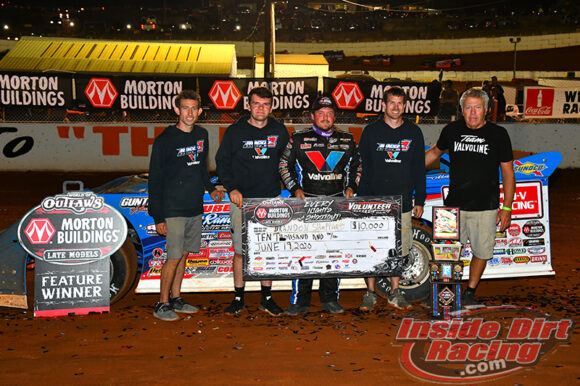 The Rocket team standing in a familiar place for them

While it may not have been in a points-paying race, Brandon Sheppard finally scored his first win of the 2021 season last Friday night in one the twin World of Outlaws Morton Buildings Late Model Series features at Cherokee Speedway in Gaffney, SC. The New Berlin, IL racer had gone deeper into the season without a win than at any other time since taking over as the full-time pilot of the Rocket Chassis house car back in 2017.

It isn’t necessary to make a big deal about every driver who wins a first race of the season but this is Brandon Sheppard and the blue No. 1 team not winning during SpeedWeeks nor the other races they have entered through late March. This team going that long without a win is noteworthy.

So now the question is whether that win will set in motion the seemingly inevitable string of victories that everyone expects will ultimately happen. And a look at the schedule would seem to indicate that this is the perfect time for that to happen.

The WoO Late Models will be heading to Farmer City Raceway this weekend for a pair of features culminating with the Illini 100. Sheppard has won that race in his home state on multiple occasions and has to be counted among the favorites to add another trophy from that event. As a matter of fact, no one would be shocked to see B-Shepp pull into victory on both nights of the weekend affair.

From there, the series moves to the Bristol Motor Speedway for another pair of races against an invitation-only field on a track at which Sheppard and his team tested a couple of weeks ago. Those are the kinds of races where this team thrives.

After that, Sheppard and crew will move further north where they will spend the remainder of their spring and much of their summer.

Will anyone be surprised if, by the beginning of August, Sheppard has reached double-digit numbers of feature wins and is leading the World of Outlaws standings?

In previous seasons, this team has gotten off to hot starts early then forced the competition to play catchup. They may be doing things a bit differently this year but don’t be shocked if the end results aren’t the same.