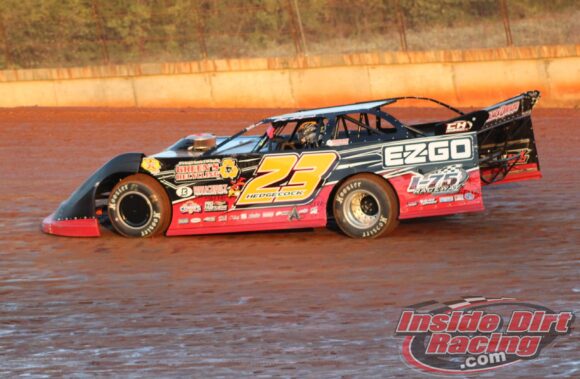 The Valvoline Iron-Man Late Model Series made its way to the I-75 Raceway on Saturday night to contest the highest paying race in the history of that facility. At the end of the night, it was Cory Hedgecock who claimed the win and the accolades that went with it which included a $3,000 bonus for posting the fastest time in qualifying, winning his heat race, and grabbing the feature checkered flag. The Black Diamond Chassis driver from Loudon, Tennessee collected a total of $15,000 for his efforts.

Cory Hedgecock proved to be fastest in Group B time-trials with a time of 14.529 seconds outperforming Eli Beets, Ryan King, Skip Arp and Eddie King Jr.

Stacy Boles was victorious in the first heat of the night ahead of Jensen Ford, Christian Hanger and Jordan Rodabaugh then Chris Ferguson took the second preliminary over Robby Moses, Ross Bailes and Jeff Neubert.

When the green flag waved over the 50-lap feature Hedgecock charged to the front of the pack with Boles, Ferguson, Beets and Ford trailing. Beets went on the move quickly as he took third away from Ferguson on the second circuit, He moved even further forward one lap later when he wrested the runner-up position from Boles.

But by lap 5, Hedgecock was asserting that he was clearly the driver to beat as be began to slip away from the pack. However, slower traffic would come into play as the early laps of the race ran caution free. Those slower machines allowed Beet to close in on the race leader but Hedgecock was able to pick his way through without a serious challenge being issued.

Further back, Ferguson looked like he could become a threat as he drove passed Boles to grab third causing Boles to then fall back into a battle with Ford who would also take a spot away from the veteran driver.

A lap 23 caution for the slowing car of Moses bunched the field and provided an opportunity to gain positions and that’s exactly what Ferguson did on the ensuing restart. The No. 22 car pulled into second forcing Beets back to third. Ford then took third away from Beets on lap 24.

His pursuers got one last shot at Hedgecock following a lap 32 caution but the No. 23 car was up to the test. Over the closing laps, Hedgecock maintained his advantage and eventually drove under the checkered flag to score the lucrative victory.