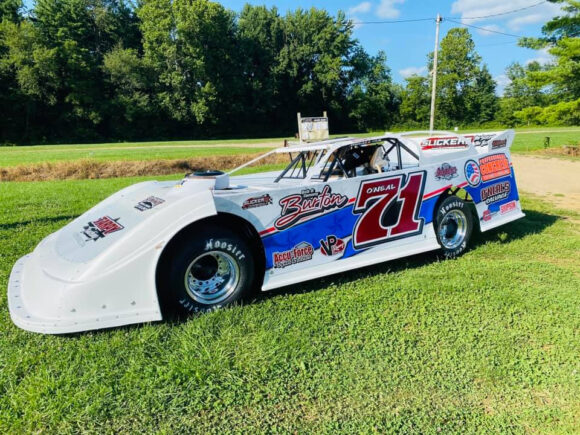 Hudson O’Neal Back in Seat with PCC Motorsports in Huge North/South 100 Weekend!

(MARTINSVILLE, INDIANA) Only about three weeks removed from his amicable split with the MasterSbilt House Car team, Hudson O’Neal announced yesterday on social media his plans of driving for upstart PCC Motorsports for the remainder of the 2020 racing season! Professional Concrete Cutting & Drilling LLC – based in Columbus, Indiana – was a valuable sponsor of Hudson during his stint in the MasterSbilt ride and owners Craig and Shannon Sims have stepped up in a big way to start up a race team in a matter of only a few weeks. Hudson, who is dating the Sims’ daughter Tessa, will pilot a brand-new XR1 Rocket Chassis for PCC Motorsports with a potent Cornett Racing Engine underneath the hood.

As long as the new powerplant is done in time, Hudson will debut next week at Florence Speedway in Union, Kentucky. He will pilot the new-look, red/white/blue #71 in four straight nights of Lucas Oil Late Model Dirt Series action at the Cincinnati-area oval, which culminates in the $50,000 to win ‘North/South 100’ on Saturday evening, August 15. Hudson, who was the 2017 Rookie of the Year with the national touring series, has six career Lucas Oil Late Model Dirt Series victories including the 2018 ‘Ralph Latham Memorial’ at Florence Speedway. More information on the lucrative week of racing action at the 1/2-mile oval can be viewed by clicking on www.lucasdirt.com.

“I have to thank Craig and Shannon (Sims) for their unwavering support and for really stepping up to field a team in such a short amount of time,” quoted the popular young driver known as “The New Deal” earlier today. “Even though things came together quickly for PCC Motorsports, no corners were cut throughout the process and I’m really looking forward to debuting the car next week at Florence. Hopefully the motor gets to us in time, so we can do a little testing before we kick off at Florence on Wednesday night. We have a lot of great sponsors that have come on board and several that we are still in negotiations with, so we will hold off on those type of announcements until we unveil the wrap on the car next week!”

While Hudson is excited to partner with PCC Motorsports for the remainder of 2020 and for select events in future years, he is still looking for a full-time ride for the 2021 campaign. If you are interested in either becoming a marketing partner with PCC Motorsports or teaming up with Hudson for 2021, feel free to contact the Martinsville, Indiana driver via email at hudsononealracing71@gmail.com.

You can keep up with the latest on Hudson O’Neal by logging onto his official website located online at www.HudsonONeal.com. Those on social media can also follow him on Facebook at www.facebook.com/thenewdeal71 or on Twitter @HudsonONeal71.