Everyone who has every sat behind the wheel of a Dirt Late Model race car has no doubt dreamed of winning one of the sport’s crown jewel events. Unfortunately for the vast majority who have competed in the sport for many years, that goal has never been realized. But for Hudson O’Neal, that achievement has already been reached at just 20 years of age.

On May 29th, the Martinsville, IN native steered his Double Down Motorsports No. 71 Rocket Chassis to victory in the Show-me 100 at the Lucas Oil Speedway in Wheatland, MO to claim one of dirt racing’s most prized trophies along with the $30,000 paycheck that accompanied the biggest win in this young driver’s career to date. But after getting his hands on that particular crown jewel, the son of legendary racer Don O’Neal would like nothing more than to acquire more of them. And one major race in particular is on this driver’s radar screen.

“There’s a lot of people who want to win, and their whole goal in their racing career is to win a Show-me 100 or to win a Dream or to win a World 100 and all of those would be great,” O’Neal said in an interview with InsideDirtRacing.com. “I got asked the other day which one sticks out to me and the one that really stuck out to me is the North-South 100 because I came so close a couple of times and I love Florence Speedway. My family has a lot of history there, my dad mainly. I think we have a good shot at it and we ran really good up there a few weeks ago. Hopefully we can go back with a little bit of vengeance and just get one more.”

O’Neal’s Show-me 100 victory allowed him and his dad to be noted as the only father-son tandem to win that prestigious race. The younger of the two knows that it could take a long time to match every win his mentor earned. Don O’Neal won the Dirt Late Model Dream in 2011 then followed that up with consecutive North-South 100 triumphs in 2012 and 2013, and finally a USA Nationals victory in 2017. That’s a lot of crown jewels to collect if Hudson is to reach that goal.

He knows, though, that he has to build his own career without worrying about comparisons.

“It’s going to take my whole racing career to catch up to him because he was so good for so long,” O’Neal said of his father’s accomplishments. “He was definitely one of the best in the sport and it’s going to take a lot to catch up to him. I try not to compare myself to him. I’m trying to just make my own way but it is awesome to keep the O’Neal name going and to be able to tie my name to races like that and be the first ever father-son duo.”

The ‘Real Deal’ is enjoying his son’s accomplishments with the Roger Sellers-owned Double Down organization.

“My dad is just ecstatic about everything that’s going on and about the opportunity Roger Sellers has given me,” the ‘New Deal’ explained. “It’s a pretty amazing feeling and I’m just blessed to be able to be in the running at some of these shows. To be competitive is all anyone can ask for and we have been. I’m just honored and blessed to be a part of it.”

O’Neal is not only quick to point Sellers out as a big reason for his 2021 success but he also names crew members Trevor Crittenden, Eric Webber, and Tom Buckingham as key ingredients within the team. His girlfriend, Tessa Sims, handles merchandising and other duties for the team throughout the week and on race days.

“It makes you feel really good,” O’Neal said regarding the efforts of his crew. “This team’s been awesome. They work so hard and they put in a lot of hours and a lot of testing hours trying to get this thing just a little bit better. I can’t take any of that credit. They make my job way easier than it needs to be at times and I owe that to them. I think that we have as good of a shot as anyone right now. As long as we can stay competitive and just keep making good decisions inside the race car, I think we will be okay.”

O’Neal was overwhelmed with emotion when he reached victory lane at the Lucas Oil Speedway. But it wasn’t just for his own satisfaction that he was so happy. The win was shared with everyone who had a hand in not only this team but throughout his entire career.

“I’ve had some people to ask me about getting emotional and whatever, but this is our life,” he remarked. “Not only me but there’s three other guys on this crew that live, eat, and breathe dirt track racing. People try their whole lives to win a race like that and just to be able to be as good as we were and be able to pull it off was an amazing moment for me and this whole team.”

Every win in today’s highly competitive Dirt Late Model is to be appreciated.

“People just don’t understand how hard it is to win these races,” O’Neal declared. “There’s a reason why in the Lucas Series we’ve had 20 or so races and there’s been 15 or 16 different winners. It’s so hard to win these races anymore and it’s getting more and more competitive every year. It doesn’t matter if you win a $5,000 or a $30,000 or a $50,000 or a $100,000, every win you need to take advantage of. They’re just not promised anymore. It’s hard to find an edge against these guys. Hopefully we can keep riding the high horse we’ve got right now. A lot of it is about the way the ball rolls and the ball is rolling in the right direction for us now.” 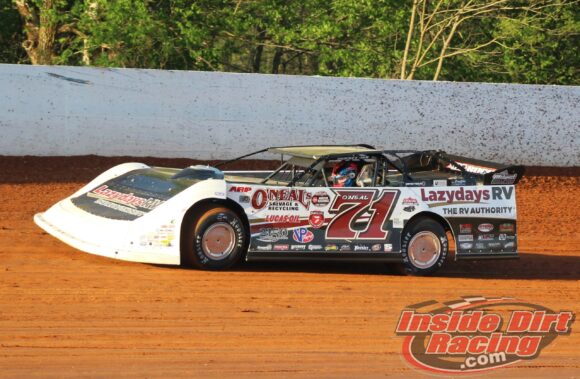 The rising star whose biggest win prior to the Show-me 100 dated back to 2018 in the $20,000 ‘Clash at the Mag’ hopes to experience many more post-race celebrations over the next several years of his career.

“It’s been so surreal being able to win a race of that caliber, it’s awesome. Not everybody gets the opportunity to do something like that so I’m just honored to be able to get one and to just say I got one is pretty awesome. Hopefully there’s many more to come but it’s definitely been a wild couple of days and it’s something that I’ll remember forever.”

O’Neal will have a chance to bolster his collection of prized trophies this week as the Dirt Late Model world descends on the Eldora Speedway in Rossburg, Ohio for not one but two Dirt Late Model Dream race with each paying over $125,000 to the victor. 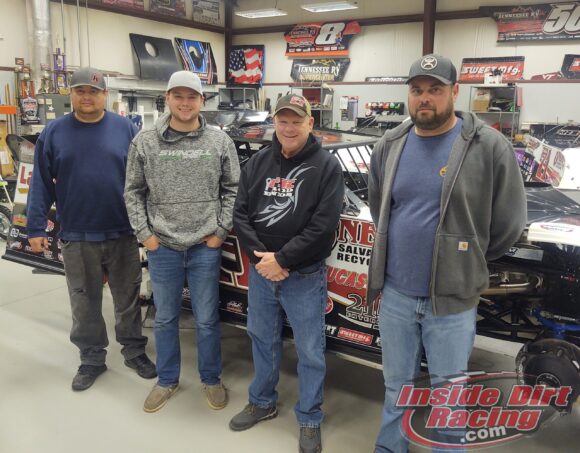