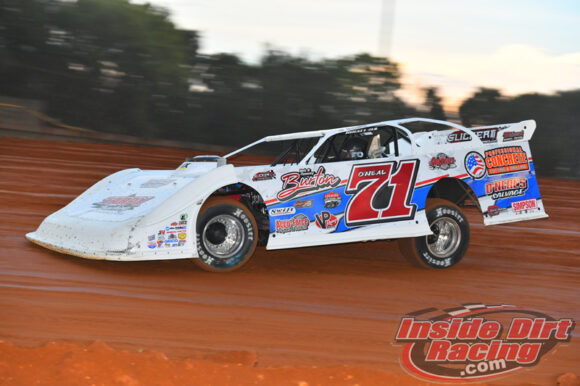 After grabbing the lead, O’Neal withstood a caution with one lap to go to become the 18th different winner this season, and he notched his first win of 2020. Owens finished in second followed by Tanner English, Jared Hawkins, and Shane Clanton.

Jonathan Davenport and Owens started on the front row with Owens taking the lead on the opening lap.  Owens and Davenport ran 1-2 for the first ten laps until Devin Moran moved into the second spot and started challenging Owens for the race lead. Moran was pressuring Owens for the lead when he suffered a left rear flat tire with 32 laps scored. On the restart Tim McCreadie moved into second, but a few laps later he would lose a left rear wheel heading down the backstretch. O’Neal became the new second-place runner and on the 37th lap he made his move for the lead.

In Lucas Oil Victory Lane for the seventh time in his career, the former series Rookie-of-the-Year was relieved and excited to get the first win for his new team that started just last month. “We were fortunate enough to win at Eldora last year on my birthday. I knew I had a good race car coming into tonight. I can’t thank Craig and Shannon Sims, my girlfriend Tessa, and Dustin Nobbe enough for their help. This has been a long seven or eight months. I didn’t think I was ever going to do it again. That one late restart helped me. I was able to capitalize. I don’t think I had the best race car, but I just think I found a line that worked for me.”

Owens was seeking his 11th series win of the season but was happy with his runner-up finish in the end. “The cautions were good for us for a while. The top side was getting higher and higher. There was a lot of thrashing the cushion up there tonight. There were people knocking quarter-panels off, I was waiting for one of mine to get knocked off. Hudson just had a good car tonight, congratulations and happy birthday to him.”

English, the top point man in the Eibach Rookie-of-the-Year chase had his first podium finish of the season. “He [O’Neal] got up to the top pretty quickly. I was racing with him side-by-side and the next thing I knew he was out in front.  He had a good car. Congratulations to him. It’s been a long year for him so it’s good see him get a win. It’s been a long year for us as well, we have been up-and-down and all around and we finally got a good result tonight.”