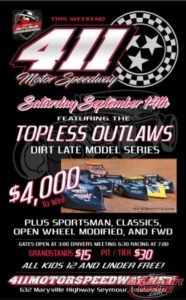 The Topless Outlaws Dirt Late Model Series is set to invade 411 Motor Speedway this Saturday night to contest a feature race that will pay out $4,000 to its eventual winner. The fledgling series is nearing the conclusion of its first season of operation with this event and one more at Volunteer Speedway in Bulls Gap, TN in October remaining on the 2019 schedule.

The series was created for the purpose of providing a place for the Limited Late Model class to race in east Tennessee and neighboring regions among the numerous tours set aside for Crate Late Model and Super Late Model cars. The machines used within the series run without a roof to allow fans to watch their favorite drivers at work and also to provide a distinction between the cars on the Topless Outlaws Series and those employed within other Late Model divisions.

So far in 2019, Hedgecock has been the dominate player on this tour as he currently holds the lead in the standings over Matt Henderson, Chase King, Mike Price and Jordan Rodabaugh. The Loudon, TN pilot of the No. 23 Rocket Chassis has earned six wins in the nine TODLMS events contested so far during the current campaign. 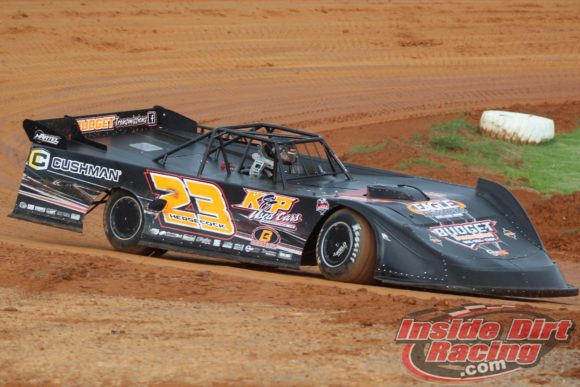 Hedgecock won the two most recent Topless Outlaws races held in August at the Crossville Speedway and at 411. The track’s other classes will also be in action on Saturday night and there will be bonuses paid out to the top finishing Crate Late Models within the Topless Outlaws race.