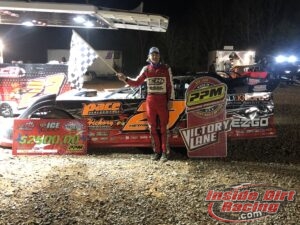 The American Crate All Stars presented by PPM Racing Products made their way to I-75 Raceway outside Sweetwater, TN for their two night season opener Friday evening with Cory Hedgecock holding off a hard charging Mack McCarter in the 40-lap feature.

The first of two B-mains for the night saw Trey Bayne run away from Jason Welshan and Baily Cardwell. Weaver took the second B-main over Addison Cardwell(r) and Ricky Greene.

The 40-lap feature saw Hedgecock on the pole with McCarter alongside with Hayden Cardwell and Trevor Sise in row two. At the drop of the green flag, McCarter stepped out with the lead followed closely by Hedgecock. The first caution of the night flew on lap three when Stephen Pedulla slowed entering turn one with significant front end damage. On the restart, McCarter once again pulled away followed by Hedgecock, Cardwell and Sise.

The yellow flag flew again on lap seven when Heath Alvey spun in turn four. The biggest indecent of the night occurred on lap 12 when Ballenger and Cameron Weaver both got loose and turned sideways in turn two. The aftermath swept up Blankenship and Greg Martin. Blankenship was done for night as a result.

On the restart McCarter once again took off with the lead but Hedgecock reeled him in via help from lapped traffic. Hedgecock took the lead for good on lap 24 and ran away from McCarter to take the $2,500 top prize. Bradley Lewelling, Trevor Sise and Hayden Cardwell rounded out the top-five.

The American Crate All Stars presented by PPM Racing Products continues their 2022 campaign TONIGHT at I-75 Raceway with night number two of the “Race Your Ice Off”.

Tune in LIVE at www.americanallstars.tv if you can’t make it to the track.