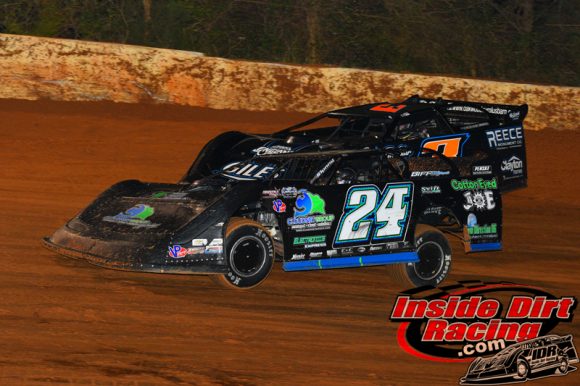 As part of the Leftover event held at 411 Motor Speedway on Saturday night the Crate Late Model division contested a feature race that paid out $1,500 to the winner. When the dust settled it was Greg Martin who left the Seymour, TN track with the top prize after a hard fought victory.

Chris Chandler led the way in qualifying when he turned a lap in 14.259 seconds around the 3/8 mile clay oval. The top-10 from time-trials were locked into their starting positions for the main event which placed Austin Neely, Tyler Arrington, Rusty Ballenger, Jesse Lowe, Greg Martin, Greg Huskey, Shannon Elrod, Jody Horton and Ross White in the first five rows on the starting grid.

A.J. Hicks and Jordon Horton won the two B-main races used to set the remainder of the starting lineup for the main event.

At the start of the feature it was Neely who went to the early lead with Chandler, Arrington, Martin and Ballenger following. Martin wasted little time in moving forward as he passed by Arrington to take third on lap 2.

A caution flag for a mishap involving Jerry Green brought out the first of multiple caution flags on the fourth lap. Martin took advantage of that ensuing restart to grab the second position when he moved around Chandler. At the same time, Ballenger also gained a spot as he took fourth away from Arrington.

Lowe also got by Arrington to claim fifth on the tenth circuit.

The third running Chandler brought out a red flag when he went for a wild ride that resulted in his car rolling over in turn two on lap 11. The driver was not hurt but his car was heavily damaged.

When the race went back to green flag conditions Martin looked to make his move. One lap later he drove under Neely and took the lead. Soon thereafter, Ballenger would also get around Neely to assume the runner-up spot.

A fierce battle between Martin and Ballenger would take place throughout the race’s second half, particularly following restarts on laps 15 and 24. But Martin would hold firm and take the checkered flag and the win.