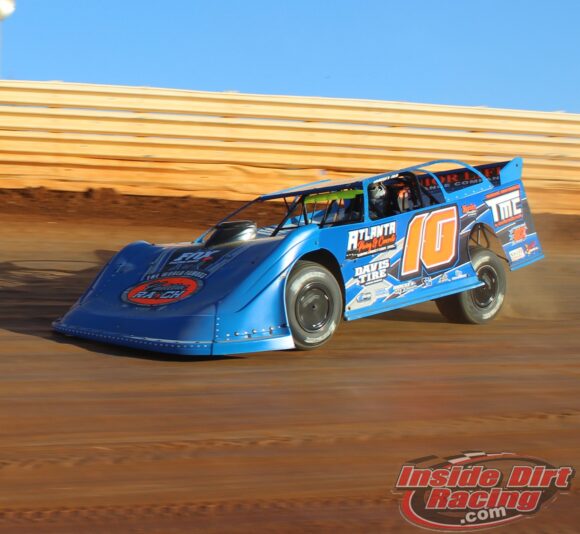 Garrett Smith was the winner on Thursday at Tri-County

Garrett Smith led all the way to claim his first Schaeffer’s Oil Spring Nationals win on Thursday night at Tri-County Race Track despite a late charge from Payton Freeman.

The Rocket Chassis driver from Eatonton, Georgia earned $4,053 from the Brasstown, NC track in a race shown live by FloRacing.com.

Feature Re-cap: At the start of the 40-lap feature it was Smith who went to the early lead with Freeman, Ferguson, Collins and Oliver following. Ferguson got by Freeman for second on the second lap while Putnam rose into the top-5.

Smith almost got into the slowing car of Levi Hicks on the seventh lap but was able to avoid. However, a yellow flag would wave for Hicks.

On the restart, Putnam got by Freeman for third as Smith and Ferguson continued to show the way. Smith began to slip away as Putnam worked under Ferguson for second. Then the second caution of the night for a spin by Hedgecock slowed the action.

On the restart, Collins blasted up to third as Smith continued to lead just ahead of Putnam. A caution for Kip Cochran on lap 14 again stalled the action.

Freeman and Fergsuon fought over the fourth spot on lap 17 with Ferguson holding the spot. Smith led at halfway over Putnam, Collins, Ferguson and Freeman. Collins then closed in on the rear spoiler of Putnam for second as Smith worked through slower traffic.

Smith’s advantage was erased on lap 32 when a caution flag waved for Galen Robinson. Collins spun on the restart as he attempted to pass Ferguson for second in turns three and four to bring out another caution.

Freeman went around Ferguson for third just before a spin by Ledford brought out a yellow on lap 34.

Freeman then got by Putnam for second just before Putnam slowed from third with three laps remaining with a flat tire. Despite the late charge by Freeman, Smith held on to claim his first career Spring Nationals win.

Is Chris Madden Set to Have One of “Those” Seasons?