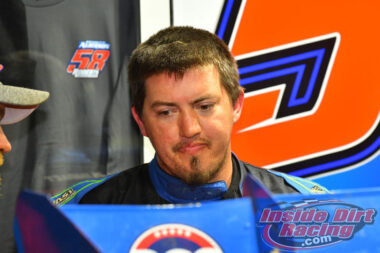 What would bring a racer from Las Cruses, New Mexico all the way to Maryville, Tennessee to race in the Valvoline Iron-Man Late Model Series/Ultimate Super Late Model Series co-sanctioned event on a Saturday evening in early March?

In particular, 2022 Lucas Oil Late Model Dirt Series competitor and ‘Rookie of the Year’ hopeful Garrett Alberson was seeking to build a notebook for later reference. The former crew chief for Earl Pearson Jr. is looking to make his own way as a driver in the national Late Model ranks. But the winner of more than 50 feature races needs to gain experience quickly to achieve his desired goals away from familiar tracks.

“We’re going to run this Lucas Oil Series this year and I know there’s going to be a lot of tracks I haven’t raced at myself even though I’ve been to a lot of them with Earl when I went up and down the road as a crew chief,” Alberson explained in an interview with InsideDirtRacing.com. “There’s a lot of tracks as a driver that I’m pretty much a rookie at so whenever we can we’re going to try to work in some of those tracks when it makes sense. We were able to hit practice at 411 a couple of days ago and it made sense to come over here and race at a track that I had never driven on.”

Alberson’s 2022 season got off to a solid start when he picked up a big win in his home state back in January. When Mike Marlar and Bobby Pierce tangled late in the going during a Wild West Shootout feature at Vado Speedway Park he was there to capitalize and collect a paycheck valued at $5,000. He then went on to finish fourth in the final standings for that mini-series behind the likes of Marlar, Tyler Erb and Pierce.

After that, however, the No. 58 Black Diamond Race Cars was thrown a bit of a curve after the various sanctioning bodies agreed to unify their rules, including the so-called ‘Droop Rule’ which is meant to limit the amount of travel in the left rear of the cars. For a team trying to learn new tracks and new rules at the same time, there have been challenges.

“It’s kind of tricky,” Alberson admitted. “The setups changed a little bit. Whenever their rules package changed, it kind of changed the way we had to think about different stuff so we went to Georgia-Florida SpeedWeeks not sure how to go about things because our base package got shifted around a little bit. And, those were all new tracks for me anyway. There was a big learning curve down there at SpeedWeeks.”

Although the results might not have been what was hoped for while in Georgia and Florida, the 33-year-old driver believes progress was made during the earliest weeks of the Lucas Oil season. Alberson currently sits 15th in the series standings with a pair of top-10 finishes to his credit.

“We learned good things and I felt like we gained on it the whole trip down there,” he pointed out. “I felt like we were getting closer to where we needed to be by the end of it so I was pretty happy with it. We’re just trying to focus in on what it’s going to take to continue on down the road with the setups we’re going to be using.” 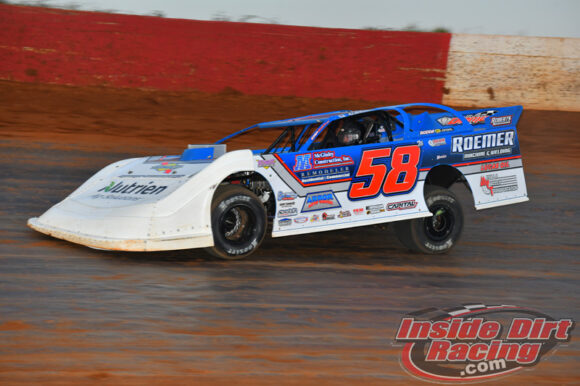 Garrett Alberson in his No. 58 Black Diamond Race Car

His first outing a Smoky Mountain resulted in a fourth-place effort in Group B qualifying and a third-place in his heat race. After lining up 12th on the feature grid, Alberson ended his night 16th on a track that will host a $50,000-to-win LOLMDS event in June.

But Alberson says he does not focus on the long term beyond building his notebook for future races.

“We’re racing for that Rookie of the Year,” the driver who won the 2021 Thaw Brawl at LaSalle(IL) Speedway pointed out. “That would, of course, be awesome. I don’t think that day-to-day I can focus on season goals because that just kind of stresses you out. We’re just going to do the best that we can in every race where we show up. We’re just going to show up kind of humble and hope to be competitive. If we can get some top-fives that would be really awesome. A win would be great and it’s always possible. For sure, we want to get some top-tens and some top-fives and show we can be consistent with these guys.”

Having been a crew chief for Pearson on the Ronnie Stuckey-owned Black Diamond house car team helped prepare Alberson for life on the road as a series racer. It also helps that his wife, Dani, is able to travel with the No. 58 crew.

“That’s the grind part of it,” he said. “It’s a Gypsy lifestyle because you’re always moving. We haven’t been home since back in December. We’ve moving around and going back and forth to Stuckey’s shop and racing. Luckily, my wife has been able to come along. She’s got a job where she can work remotely and that helps a lot. She’s really good at helping on the car whenever she gets off work, she’s another crew member we’ve got. You’ve just got to communicate well with everybody and make sure you give everybody the space they need.”

The Lucas Oil Late Model Dirt Series was to have been in action this past weekend at 411 Motor Speedway in Seymour, Tennessee but that double-header was wiped out by the weather. The next races on the tour’s schedule are set for Atomic Speedway in Alma, Ohio and Brownstown(IN) Speedway on March 18th and 19th respectively.

Please consider also reading: Kyle Larson: “Every time I get in a race car I get better”