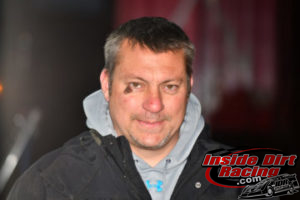 The 2019 season has not gone exactly as was originally planned for veteran Dirt Late Model racer Chris Madden. At the beginning of the campaign all signs pointed to the driver who was coming off of two consecutive top-3 finishes in the World of Outlaws Late Model Series standings to once again challenge for a title on that national tour. However, he and the team he began the year with parted ways just a few short months into their partnership leaving the Gray Court, SC competitor’s season in limbo.

However, things took a turn toward the good for the 44-year-old Madden in July when it was announced that there would be a reunification of sorts with National Dirt Late Model Hall of Fame driver and car builder Scott Bloomquist. For a short time, ‘Smokey’ served as a crew chief for Bloomquist as a Sweet-Bloomquist Race Car was being built for him. Then in the Silver Dollar Nationals at Nebraska’s I-80 Speedway he debuted his new ride with a second place finish in the $53,000-to-win feature.

The five-time Southern Nationals champion had driven Bloomquist Race Cars to great success earlier in his career and the two drivers had been allied closely.

But as good as that initial effort was, things have only gotten better for Madden. With the Dirt Late Model season hitting a stretch of high-paying crown jewel events, the driver once considered a top regional standout showed that he can win outside of the southeast when he scored his first ever crown jewel triumph in the $50,000 USA Nationals at Cedar Lake Speedway in New Richmond, WI. last weekend.

But wait, that’s not all. Heading into yet another of the sport’s biggest races, Madden has scored his second win in three outings in the Sweet-Bloomquist machine. On Thursday night at Kentucky’s Florence Speedway, the No. 0M car took the checkered flag in a $10,000-to-win preliminary ahead of Saturday’s North-South 100.

This is a driver who has won throughout his career in Bloomquist Race Cars, Longhorn Chassis, Barry Wright Race Cars and Capital Race Cars. And now, his is tearing up the track in a new Sweet-Bloomquist Race Car just when it looked as if his season was in jeopardy of going way off the rails. Indeed, everything has fallen into place at just the right time for Chris Madden.