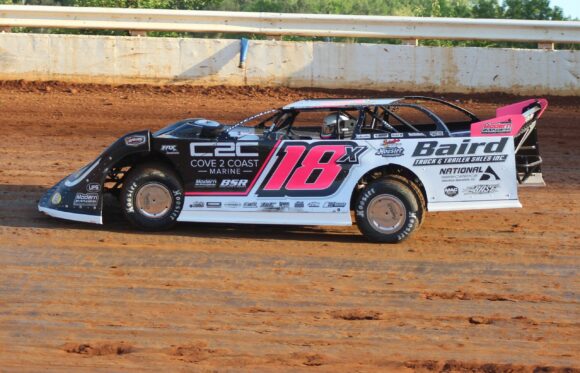 The 31st annual Ice Bowl is set to run this weekend at the Talladega Short Track in Eastaboga, Alabama. A total of eight classes are scheduled to contest events at the track located near NASCAR’s Talladega Super Speedway and each driver entered would love to claim the trophy and paycheck for his/her particular division. But the one of those features could prove to be the most rewarding to win financially for a driver who has everything go his way.

Those competing in the unsanctioned-Super Late Model main event have a chance to earn a handsome bonus for their efforts.

Michael Page of Douglasville, Georgia has won the Super Late Model feature in this traditional January event held at the track known as “The Hornet’s Nest” for five consecutive years dating back to 2017. As a result of that dominance, event organizers have gone ‘old school’ and placed a bounty on the head of the driver of the No. 18x machine. Beat the man and get the money.

The 50-lap Ice Bowl feature for the Super Late Model class is set to payout $6,000 to the victor. However, if someone other than Page wins the race, that driver will receive an additional $1,500 provided Page finishes the race and is running on the lead lap at the time the checkered flag waves.

This race, which was first held in 1991, has quite a storied history with a notable list of former winners that includes Shane Clanton, Ray Cook, Mike Head, Dale McDowell and inaugural champion Ronnie Johnson. However, none of those legendary pilots was ever able to show the type of domination that Page has achieved over the past five runnings of the event.

There will be a practice session at Talladega Short Track on Thursday, January 6th with qualifying and heat races slated for Friday, January 7th. B-mains and features for all divisions will be held on Saturday, January 8th with the following Sunday held in reserve should there be a weather related postponement.

For those who cannot attend, the action will be shown live on FloRacing.com.