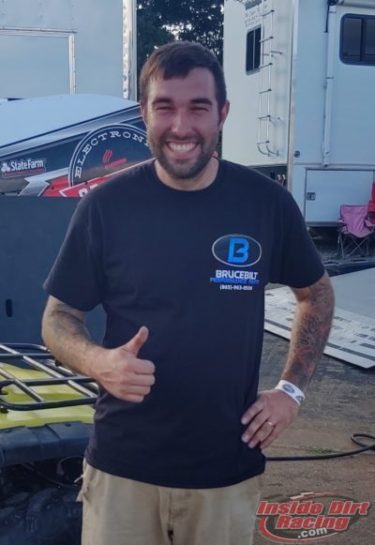 A few years ago Dustin Linville appeared to be on the verge of making a major splash in the world of Dirt Late Model racing. He had scored wins in events such as the Fall Classic and the Junebug Rowland Memorial as well as two Red Clay Bash features at Ponderosa Speedway. And more, the Bryantsville, KY native had finished third in a $15,000-to-win Ultimate Super Late Model Series event at Ponderosa behind two of the sport’s biggest stars in Mike Marlar and Scott Bloomquist.

However, life intervened and Linville decided that he had obligations that outweighed racing so he stepped away from the sport following the birth of his second child.

“We had our second little girl and racing takes up so much time,” Linville pointed out in an interview with InsideDirtRacing.com. “We wanted to step out and do other things. Family is number one and we wanted to make sure that was our priority.”

But the desire to compete was still there. And with his daughters getting a bit older, the 28-year-old racer seized on an opportunity to get back in the driver’s seat with an old associate. However, things did not go quite as well as the team had hoped.

“Earlier this year we had our former chassis builder, Audie Swartz, approach me about running his house car on occasion,” Linville explained. “I said sure because he had always helped us a lot and he was a really good family friend of ours. We were just going to do a limited type schedule with him. And the first night out, I had brought one of my former sponsors with me who had told me if I ever got back in racing he wanted to be a part of it. Our first night went a little bit sour and I don’t think we were on the same page as far as what the game plan actually was.”

Since then, Linville and a newly formed team has acquired a Rocket XR1 Chassis and with help from Brucebilt Performance in Knoxville they have taken to the track with the backing of sponsor Tim Short Chevrolet. Over the past two weeks the No. D8 machine has placed in the top-5 with a fifth place result in the Fred Dillow Memorial at Ohio’s Portsmouth Raceway Park followed by a third this past weekend in the Iron-Man Championship Late Model Series feature at 411 Motor Speedway in Seymour, TN. 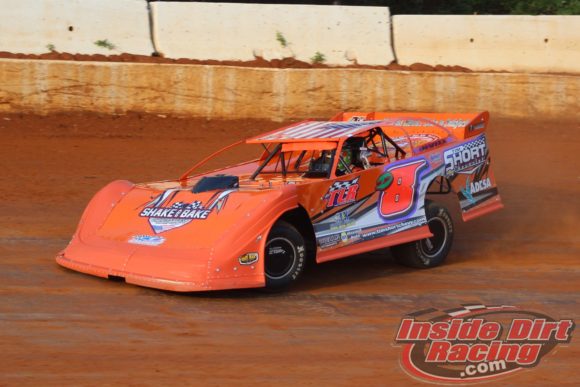 Dustin Linville in his No. D8 ride

Linville credits his sponsor with putting him in this competitive ride.

“Our sponsor, Tim Short, came to me within the week(of his return to racing) and said if I wanted to race just whenever I wanted to race he would get us something lined out and here we are,” the driver known as The Rooster said. “I told him when he was getting involved that this racing stuff ain’t cheap but he just loves it as much as we do. We’re blessed to have the opportunity to enjoy it again as a family. We can just have some fun now.”

This Friday night Linville plans to race on the track where he has enjoyed his greatest success when the Lucas Oil Late Model Dirt Series contests a $12,000-to-win event at Ponderosa Speedway in Junction City, KY.