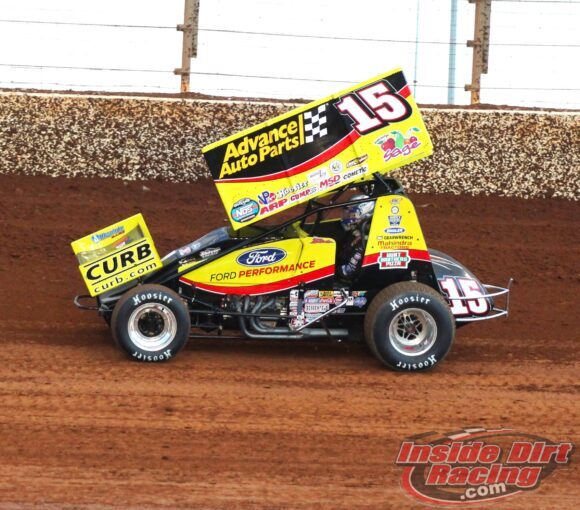 Donny Schatz took the lead on a lap 4 restart

Donny Schatz showed that he can still get it done on Friday night in the penultimate feature of the World of Outlaws NOS Energy Drink Sprint Car Series in the World Finals at The Dirt Track at Charlotte when the North Dakota native and 10-time WoO champion took the lead early on in the feature then drove on to claim the $15,000 victory.

Three-time and defending series champion entered the night with a 22 point advantage over David Gravel. ‘The Big Cat’ earned a third-place finish compared to Gravel 10th place result which extended his lead to 36 points going into Saturday’s finale.

Feature Re-cap: When the green flag waved over the 30-lap feature it was Sweet and Schatz who completed the first lap in a dead heat with Sweet eventually assuming the race lead until a caution for the slowing car of Schuchart.

On the lap 4 restart, a wild crash sent Macri flipping. He was then hit by other cars but was reported by officials to be unhurt. Williamson, Thomas and Wise sustained damage in the crash.

On the second attempt at a restart, Schatz went ot the lead with Sweet and Bayson trailing. Just outside the top-5 Carson Macedo and Scelzi were exchanging the sixth spot through each set of turns as the feature passed the lap 10 mark.

Schatz began to slip away from his pursuers at the halfway mark as the front runners battled slower traffic. With 10 laps remaining, Schatz continued to show the way while Eliason burst into the top-5 further back by passing Bayston and Cole Macedo.

A lap 28 caution for the slowing car of Noah Gass set up a final dash to the checkered flag. Schatz maintained the lead over the final two laps while Eliason blasted up through the top-5 to claim second.