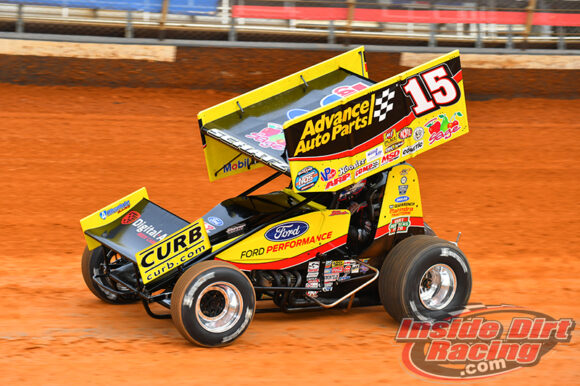 WEEDSPORT, NY – July 31, 2022 – After 42 races away, Donny Schatz finally made his long-awaited return to Victory Lane with the World of Outlaws NOS Energy Drink Sprint Car Series on Sunday night.

The box score will show a clean sweep of the evening for the Fargo, ND native, but it was no easy task come Feature time as a hard-charging David Gravel and Logan Schuchart made their presence felt in the final laps of the Empire State Challenge. On the 29th circuit with the white flag waving, the entire top-three were separated by only 0.911-seconds and it was truly anyone’s to take.

It was a 44-year-old champion of the sport vs. a 30-year-old proven Weedsport ace and a 29-year-old rising star within the Series. By the time the checkered flag waved, it was Schatz’s veteran prowess and mental fortitude paying off against the young guns.

“In my 26 years, I was always taught to worry about what is in front of you, and not what was behind you,” Schatz said on his mindset. “As long as I’m doing things rights, then it’s their job to pass me so I’m not going to change what I’m doing for what hasn’t impacted me yet.

Every race is made for winning, but we just haven’t been there. I don’t know if we were the best car at the end tonight, but we were able to get out front and stay there and battled through lap traffic. It’s been a tough learning curve these last few years with all the changes going on, but I feel like we’re getting a better handle on it.”

The victory now gives Schatz three wins in six starts at Weedsport Speedway, one of the quirkiest surfaces on the schedule with The Greatest Show on Dirt.

“You hear fans talk about how unique this place, but I wish you could see it from our perspective,” Schatz said on the layout. “It’s just different. You have to be on your game 110% of the time and that makes it a ton of fun to race. I’m glad we could pick up another win here.”

Earning the KSE Hard Charger Award with his ninth-to-second run, David Gravel was only 0.480-seconds away from making it three consecutive wins at Weedsport Speedway on Sunday. The Big Game Motorsports #2 was operating in the caution-free 30-lap finale as he quickly made it to fifth on Lap five, third on Lap 14, and then second on Lap 20.

The Watertown, CT native was 2.284-seconds behind the #15 when he drove by Brock Zearfoss for second, but promptly whittled that advantage down to nothing as he made it to Schatz’s rear bumper in the final laps. With lappers clogging the high lane and Gravel’s distinctive line boxed in a corner, he ran out of options and settled for a stellar runner-up result to continue cutting away at the championship lead.

“I know I was gaining down the straightaways, but it didn’t pay off in the corners with where I needed to get going,” Gravel noted. “It was a really good weekend in all, though. This is great momentum for us leading into the Ironman 55 and Knoxville Nationals. I’m excited for the rest of the season, this team is feeling good.”

Ending a 15-race absence from the podium, Logan Schuchart scored his first top-three outing in more than a month as he offered a spectacular showing in the late stages at Weedsport. The Hanover, PA native found an eccentric method to attack the track and cut his gap from 3.4 seconds to nothing in the last eight laps as he made it a three-way battle for the lead at the end. Were it not for lap traffic on the final circuit, the Shark Racing, DuraMAX Oil, Drydene Performance Products #1S may have been able to sneak out a stunner for win #2 of the season.

“I think a little iRacing helped out tonight,” Schuchart joked on the frontstretch. “I could sail it off in there into turn one with a lot of speed and bounce it off the cushion in turn two, and I think I made a ton of speed that way. I thought I had a good shot to maybe surprise Donny and David, but the lapper hurt my momentum when I needed it most. It feels good to be back up here on the podium, and we did it by passing some great cars. This definitely gets the confidence up ahead of Ironman and Knoxville.”

Brock Zearfoss earned his third top-five finish of the season with a fourth-place effort aboard the Moose’s LZ Bar & Grill #3Z, while James McFadden finished fifth to score his 13th top-five result in the Roth Motorsports #83.

With a 15th victory, New York is officially the sixth winningest state of Schatz’s World of Outlaws career behind Pennsylvania (36), Ohio (29), Iowa (24), North Dakota (23), and California (20). Weedsport Speedway also become the 39th track that Schatz has conquered on at least three occasions in World of Outlaws competition.

Schatz topped My Place Hotels Qualifying for the second time in two weeks, bumping his total to 109 career QuickTimes with the World of Outlaws. At 13.555 seconds around Weedsport, the Tony Stewart/Curb-Agajanian Racing #15 was almost four-tenths faster (0.371) than the field.

UP NEXT (Fri-Sat) – The World of Outlaws NOS Energy Drink Sprint Car Series returns to Federated Auto Parts Raceway at I-55 in Pevely, MO next weekend on Friday and Saturday, August 5-6. The Greatest Show on Dirt will be joined by the Xtreme Outlaw Midget Series for two nights of epic action at the annual Ironman 55. Fans can BUY TICKETS HERE, or watch every lap LIVE on DIRTVision.