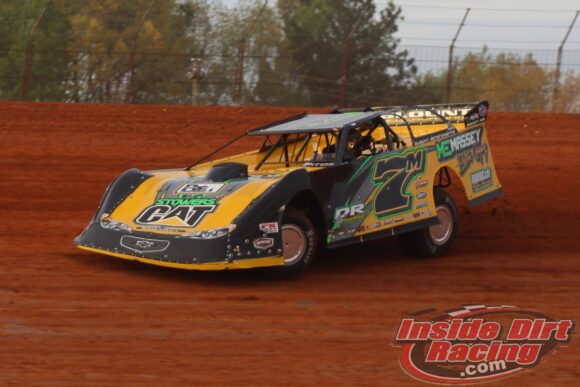 The Valvoline Iron-Man Late Model Series set a three-race weekend in motion on Friday night at the Boyd’s Speedway. After a dominating night of racing by Donald McIntosh at the Ringgold, Georgia facility it was the Blount Motorsports who claimed their first feature victory of the 2021 season. The Rocket Chassis driver from Dawsonville, Georgia took home a first place prize of $4,000 for his efforts.

The top-6 from each group transferred to the feature.

David Payne beat out Tod Hernandez, Jesse Lowe and Danny Turner in the lone B-Main race of the night.

When the green flag waved to put the 40-lap feature in motion, it was Croft who took the early lead with McIntosh, Seawright, Scott Cook and Ford trailing in his wake. However, McIntosh would not wait long to play his hand as he moved inside of the Croft machine on the second circuit and surged to the lead of the race. Further back, Ford and Ray Cook teamed up to pass by Scott Cook laying claim to the fourth and fifth positions respectively.

McIntosh immediately began to pull away from the pack. By the fourth lap he held an advantage of almost a full straightaway while Croft fought to hold back the advances of Seawright and Ford. Just behind that battle, Skinner moved up a position by taking fifth away from Ray Cook.

A lap 11 caution for a spin by Craig Greer allowed the field to briefly catch back up to McIntosh. However, when green flag action resumed, the No. 7M machine quickly began to pull away again. However, this time he would have a new foe leading the charge against him as Seawright jumped up to the runner-up position on the lap 11 restart.

Ford moved up to third soon after the lap 11 restart and looked to close in on Seawright. But another yellow flag would wave just one lap shy of the halfway mark when Ray Cook slowed with what appeared to be mechanical issues. On the ensuing restart, it was Ford who would take a turn pursuing McIntosh as he got by Seawright.

Seawright would fight back and reclaim second with an outside move on lap 22. From that point, it was an all McIntosh show as he pulled away and won by a healthy margin.