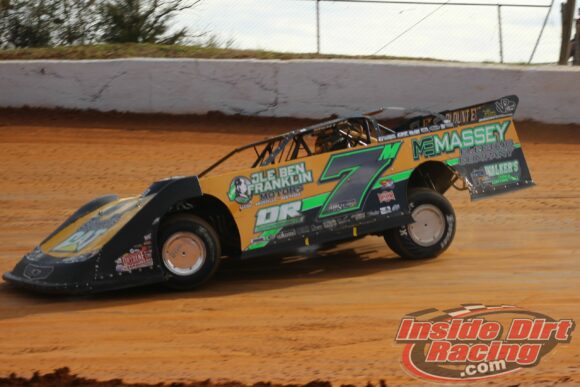 Donald McIntosh led all 40 laps in the Hangover

The Saturday portion of the 2019 Hangover event at 411 Motor Speedway featured the Super Late Model class racing for a first prize of $5,000. At the end of a beautiful afternoon it was Donald McIntosh who left the Seymour, Tenn. facility with the winner’s check and trophy following his fourth win in this race.

The field was broken into two groups for qualifying with the top-8 from each group transferring directly to the feature.

Donald McIntosh proved to be the fastest in Group A time-trials as he turned a lap around the 4/10 mile clay oval in 15.017 seconds. That lap beat out Jackie Boggs, Christian Hanger, Cory Hedgecock, Bobby Giffin, Mike Weeks, Aaron Guinn and David Earl Gentry.

Josh Rice and Steve Stollings won the two B-main races used to set the remainder of the starting lineup for the main event.

At the start of the 40-lap feature it was McIntosh who bolted to the early lead with Hickman, Boggs, Rodabaugh, Hedgecock and Roberson trailing. Hedgecock moved around Rodabaugh for the fourth spot on the second lap.

At that point, the top-4 of McIntosh, Hickman, Boggs and Hedgecock broke away from the pack and looked as if they would settle the issue among themselves. In a race that would ultimately run caution free, the front runners found themselves battling among slower traffic by the ninth circuit.

Hickman closed on McIntosh’s rear spoiler as the feature approached the halfway point but was never able to find his way around the No. 7m car.

With ten laps remaining, Boggs slipped around Hickman to seize the runner-up position. Two laps later, Hedgecock took third away from Hickman. At the same time, McIntosh had cleared the slower traffic and began to put distance between himself and his pursuers.

The Georgia native eventually crossed under the checkered flag to earn the victory.