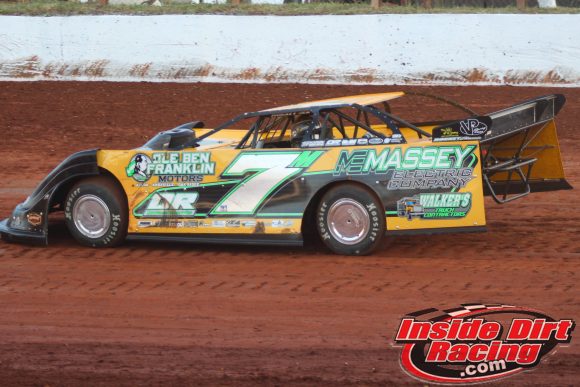 The Spring Nationals headed to the Rome Speedway for the penultimate event in the mini-series. At the end of the night it was Dawsonville, Georgia’s Donald McIntosh who came away from his home state track with the $5,000 victory.

Donald McIntosh led the way in Group A qualifying with a lap if 13.733 seconds around “The World’s Fastest Half-mile Clay Oval” as he beat out Brandon Overton, Jason Croft, Tanner English and Ross Bailes.

Those five drivers would start on the inside of the first five rows in the feature.

Ricky Weiss was fastest in Group B qualifying and overall as he posted a lap of 13.644 seconds to better the efforts of Casey Roberts, Dale McDowell, Tyler Millwood and Michael Page.

Those drivers would start the main event from the outside of the first five rows.

At the start of the 50-lap feature it was McIntosh who surged to the lead with Overton, Roberts, Weiss and English in his wake. On lap the Spring Nationals points leader McDowell passed by Croft to grab the sixth spot while the top-3 of McIntosh, Overton and Roberts slipped away from the rest of the pack.

Two drivers who would have been considered pre-race favorites experienced trouble in the early going. On lap 11 the winner of the Spring Nationals race on Saturday night at the Dixie Speedway, Michael Page, slowed and pulled off the speedway with mechanical issues. Then on lap 13 the second running machine of Overton headed to the pit area and was finished for the night.

The second half of the race would feature a series of yellow flags that would keep the pack tightly bunched but would also see McIntosh pull out to relatively comfortable margins on each ensuing restart.

Fast qualifier Weiss had emerged as the most serious threat to McIntosh following Overton’s demise. However, the Canadian driver suffered a flat tire on lap 27 that relegated him to the tail of the field after a caution.

McDowell and Chris Ferguson fought over positions at the back of the top-5 over the closing laps, while at the same time, Roberts moved around English to claim third on lap 37.

But over the final circuits, no series challenge to McIntosh came to be as the No. 7 roared under the checkered flag to score the victory.