Donald McIntosh begins 2015 with convincing victory in ‘The Hangover’ 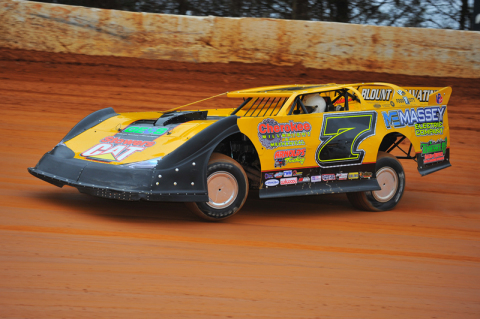 Donald McIntosh wheeled his Blount Motorsports ride to a win at 411.

Donald McIntosh ended his 2014 racing season by winning the ‘Turkey Gobble 50’ at the Boyd’s Speedway last November. On Thursday, the Dawsonville, Georgia native picked up right where he left off less than two months ago by capturing the inaugural Dirt Late Model race of the season in ‘The Hangover 40’ at 411 Motor Speedway.

McIntosh picked up $4,000 after turning in a dominating performance over an impressive field of 47 cars that assembled on New Year’s Day on the Seymour, Tenn. track.

Frequent 411 Motor Speedway competitor Cory Hedgecock demonstrated strength at the beginning of the day by breaking the track record with a lap of 13.028 seconds around the 3/8 mile oval. Joining Hedgecock in earning spots for a dash race that would set the top-4 starting positions in the feature were McIntosh, Ryan King and Stephen Breeding.

After a redraw set the lineup for the dash, McIntosh captured the pole for the main event by winning the preliminary ahead of Breeding, King and Hedgecock.

McIntosh immediately bolted to the lead at the start of the 40-lap feature ahead of Hedgecock, Breeding, King and Pierce McCarter. However, an incident that occurred well away from the leaders just after the completion of the first circuit almost impacted the front runners. Charlie Zimmerman, Aaron Ridley and Benji Cole spun at the exit of turn two, but as the lead machines slowed to observe the yellow flag, Hedgecock was tagged in the rear and sent spinning toward the infield. Ultimately, the Loudon, Tenn. driver’s car was undamaged and he was allowed to reassume his runner-up spot.

Caution flags for drivers Marlar and Riley Hickman, both of whom might have been considered pre-race favorites, slowed the pace during the first 10 laps of the event. But what may very well have been the race’s most pivotal moment took place on lap 13 when the hard charging Hedgecock suffered a flat left rear tire while pursuing McIntosh for the top spot. Hedgecock did not return to the race after suffering that misfortune.

The next 21 laps of the race ran caution free, which allowed McIntosh to stretch his lead over Arthur to a distance of almost half the track. During that stretch, the Blount Motorsports driver lapped cars all the way up to the 6th position before a lap 34 caution erased his advantage.

Over the final six lap dash to the finish, Donald McIntosh was not challenged as he drove to the checkered flag ahead of  Walker Arthur, Stephen Breeding, Pierce McCarter, Jeremy Hines, Ray Cook, Rusty Ballenger and Dusty Carver.