Does the Presence of NASCAR Drivers Help or Hurt Short Track Events? 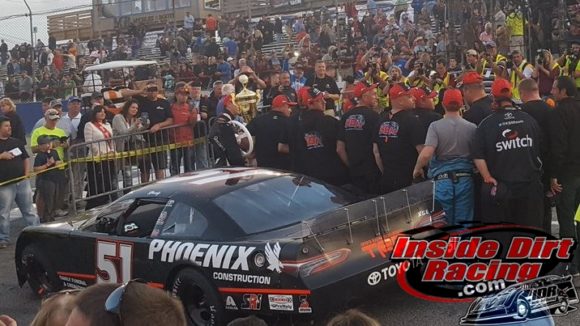 Kyle Busch pulled his No. 51 machine in the Snowball Derby victory lane on Sunday(Matt Weaver photo)

The world of asphalt short track racing had what is considered by many to be it most prestigious event this past Sunday when the Snowball Derby ran at the Five Flags Speedway in Pensacola, Fla. Former Monster Energy NASCAR Cup Series champion Kyle Busch won the crown jewel feature for asphalt Super Late Model cars as he executed late race passes to beat out Jeff Choquette and Bubba Pollard, who are regulars in that form of racing.

With such a prominent star winning a short track race that does not fall under the sanction of NASCAR, it raises the question of whether or not he should have even been among those drivers taking the green flag for the event. In other words, does the presence of someone like Kyle Busch serve as a benefit for races such as the Snowball Derby and/or prominent dirt track events outweigh the threat that a Cup driver could take the top purse money and thus deprive regulars in these forms of racing from much needed payouts?

As is often the case when an issue such as this arises, I took to my Twitter account(@RichardAllenIDR) to gauge the opinions of fans. And the results of my poll question were decidedly in favor of having NASCAR stars put their skills to the test in events that fall outside of their normal realm.

Here is the question I asked of my Twitter followers:

Poll Question: Is NASCAR driver participation in those races good for the smaller events?

The answer choices were:

No, they take the money

A total of 252 people voted in the poll. Fully 75% chose the “Yes, it adds exposure” response while the remaining 25% opted for “No, they take the money“. So it appears that fans like seeing the most well known drivers compete against the regulars in these types of races that do not fall under the sanction of NASCAR.

It seems noteworthy at this point to say that there is a clear difference in fan preferences over these shows as opposed to NASCAR Xfinity Series events or NASCAR Camping World Truck Series races. Racing enthusiasts have been so adamant in their displeasure with Cup regulars in those events that NASCAR has placed limits on their participation therein.

Short track races such as Snowball Derby or dirt races such as World of Outlaws Sprint Car Series races that a driver such as Kyle Larson might participate in are different in the sense that simple scheduling prevents the Cup guys from joining more than on just a few occasions throughout the year. On the other hand, Cup regulars have far more opportunities to invade those NASCAR divisions that race in support of the bigger series.

The star power brought to a local track by someone such as a Kyle Busch, Kyle Larson or Tony Stewart has the ability to draw in new fans that might not otherwise have visited that particular track. Further, sponsors and other backers of those drivers might become inclined to invest in other forms of racing aside from the more well-known NASCAR drivers and events once they are exposed to those other forms. 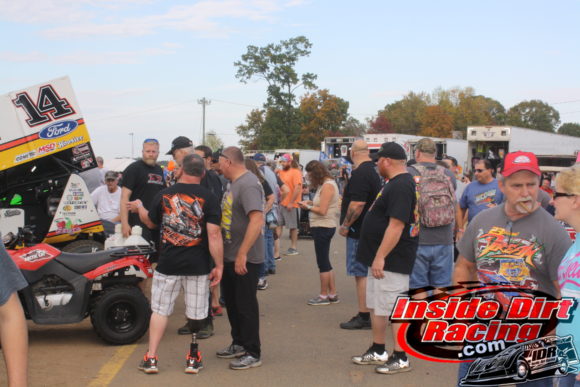 Fans gather around the Sprint Car driven by Tony Stewart in Charlotte.

On the other hand, there is that possibility of the NASCAR driver winning the race and taking valuable purse money away from teams with far less financing at their disposal. For many, there is just something wrong with a driver who makes millions of dollars in his “real job” winning a race that pays a few thousand that could be better used by a team that doesn’t operate with such a lucrative budget.

In the end, however, the notoriety brought to “lower” forms of racing by NASCAR drivers has to pay dividends in the long run. One track located here in east Tennessee has told me that the number of pit passes they sell when a NASCAR driver is expected almost triples the normal rate. And media coverage from outlets that might normally only cover NASCAR sanctioned events focuses new eyes on short track racing.

Further, a number of NASCAR drivers contribute to the sport as owners of short track teams or promoters of special events. All in all, involvement by NASCAR’s stars in other forms of racing has to be seen as a positive and the fans involved in my poll seem to agree.