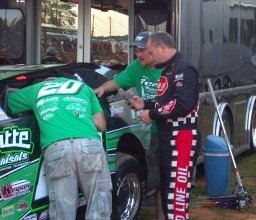 Jimmy Owens looks to be using social media before climbing into his car.

For several years now, I have been an avid user of social media. I enjoy using both Twitter and Facebook to interact with people and promote my websites. The conversations held on those two sites often lead to new stories or blogs, and this is one of those cases.

I write both NASCAR and dirt racing related pieces which has caused me to draw some conclusions about the use of social media in both forms of racing. Due to the varied nature of my websites, I actually have separate Twitter and Facebook accounts set up to promote each site.

The reason for the sudden interest in where most interaction comes from for each form of racing actually developed out of the creation of this very website and its supporting accounts. When Michael Moats and I created this site, we set up Twitter and Facebook pages for the purpose of interacting with fans, drivers and other parties with which we would need to communicate.

Immediately, it became apparent that one form of social media was preferred by dirt racing fans over the other. Within the first 24 hours of the website’s unveiling, the new Facebook page had received almost 2,000 “likes”. In that same time period, the Twitter account had acquired just over 200 “followers”. Those numbers led to the question mentioned in the earlier paragraph.

Dirt Late Model driver Chris Ferguson(@chrisferguson22 on Twitter), one of the more active dirt racing personalities on social media, replied to that post with, “Because dirt racing fans are behind on social media. They are just now getting into Twitter and have been on Facebook.” But Ferguson stated his belief that both forms of communication will catch on with dirt fans when he went on to add, “Think about it though. 5 years ago older people didn’t even know what Facebook was. In 5 years older people will all have Twitter.”

Further investigation revealed that it was not just our website that saw these kinds of differences. The popular dirt racing outlet DirtonDirt.com has over 72,000 “likes” on its Facebook page while its Twitter account has just under 13,000 “followers”.

Soon after posting those numbers, @DirtonDirt responded via Twitter that, “It’s something we’re very aware of, too. In our case, we started Facebook a few years before Twitter so that plays a factor.” And, “Ultimately, we use each social media platform differently and each is better than the other for certain things.”

NASCAR, on the other hand, is just the opposite. Twitter has become THE means of communication in that version of the sport. Drivers, crew members, media members and various other personalities from that form of racing have adopted Twitter as a primary means of interacting with and getting information to fans.

The draw of NASCAR fans to Twitter appears to come from the authenticity of the interaction.

@Corey3549 pointed out that on Twitter, “And also almost everybody in NASCAR are actively on Twitter daily. Roof names are their Twitter handles.” Then added, “Seems like a lot of the NASCAR Facebook accounts are run and maintained by the marketing folks.”

NASCAR drivers on Twitter gained a great deal of attention during the 2012 Daytona 500 when, during the long delay for a jet dryer fire, Brad Keselowski and others took to their cell phones to pass the time and interact with fans and media. Hundreds of thousands joined in on the conversation that night. 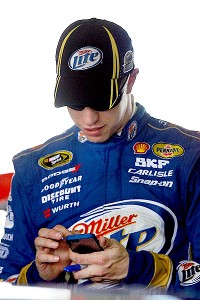 Brad Keselowski is one of the most active NASCAR drivers on Twitter.

Since that time, Twitter has become the primary source of news and interaction among NASCAR’s drivers, media and fans.

Ironically, even though the question mentioned above was made on my dirt racing accounts, most of the responses came from Twitter rather than Facebook. So, it appears as if there are indeed dirt racing fans on Twitter. That means there may be a resource out there that is going untapped.

Unfortunately, most dirt racers and tracks do not seek to take full advantage of the possibilities social media offers. Those who have Twitter and Facebook accounts many times only use them to make an announcement and rarely interact. As a result, they have fewer followers than they potentially could have.

NASCAR has taken full advantage. Dirt racing could learn lessons from the asphalt sanctioning body and its participants.

I think my ultimate point is that dirt racers, promoters and sponsors need to work at getting more fans involved in all forms of social media. This is a tool that doesn’t cost anything to use and offers the ability to reach thousands. And in this era of track closures, keeping those who mean the most to the sport engaged is more important than ever.