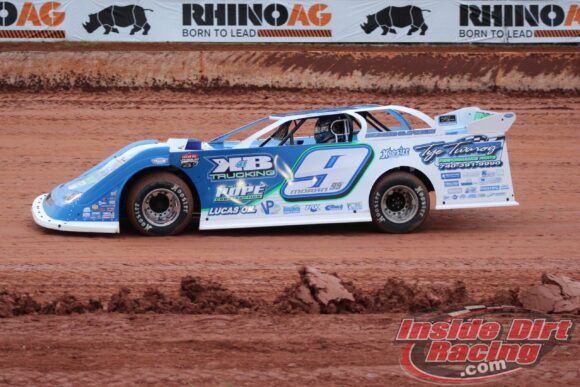 The DIRTcar Nationals continued on Thursday night with a World of Outlaws Morton Buildings Late Model Series-sanctioned event at Volusia Speedway Park. At the end of the night, Devin Moran left the Barberville, FL track as the winner following a rain delayed feature in an event shown live by DirtVision.com. The Dresden, OH driver earned $10,000 for his efforts.

A total of 50 cars were signed in for competition

A lap of 16.146 seconds placed Brandon Overton at the top of Group B time-trials with Tyler Bruening, Joe Godsey, Brent Larson, and Chad Finley completing their runs just a tick slower.

Devin Moran scored the win in the night’s first heat by beating Kyle Strickler and Scott Bloomquist while Chris Madden outran Bobby Pierce and David Breazeale in the second preliminary.

After a lengthy rain delay following the second heat, several teams withdrew rather than race on the track that had taken a significant amount of moisture. Also, Group B fast qualifier Brandon Overton pulled off the track on the pace lap for his heat race with fluid leaking from the rear end of his car.

It was Kyle Bronson who beat Jimmy Owens and Ricky Weiss to the finish line in the third heat race just before Cade Dillard bested Brent Larson and Josh Richards in the fourth heat.

Tyler Bruening took the checkered flag ahead of Ricky Thornton Jr. and Chad Finley in the fifth heat then Dale McDowell bested Darrell Lanigan and Shane Clanton in the sixth and final preliminary.

Chase Junghans and Jeff Mathews transferred to the feature out of the first Last Chance Showdown with Brandon Overton and Brandon Sheppard joining them from the second. Finally, Dennis Erb Jr. and Tony Jackson Jr. moved on to the main event from the final LCS.

The start of the 40-lap feature saw McDowell go to the early lead with Madden, Bruening, Bronson and Moran in his tire tracks. An incident just after the conclusion of the first lap of green flag action damaged Lanigan, Clanton, Junghans, Finley, Larson and Dillard.

On the lap 1 restart, Moran slipped by Bronson to take fourth. Madden moved in to challenge McDowell for the top spot and eventually took it on lap 4. Moran continued his rise on lap 5 when he passed by Bruening for third.

McDowell closed back in to fight with Madden for the lead on lap 7 and that battle continued until a caution flag waved on lap 9 for the stalled car of Blake Spencer.

On the lap 9 restart, Moran surged to second while Pierce entered the top-5. Pierce then took fourth from Bruening on lap 11 just before another yellow flag was displayed when Eckert slowed on lap 12.

On the lap 12 restart, Pierce took third away from McDowell but another caution came out one lap later when Owens slowed.

As the race approached the halfway mark, Moran closed in on Madden to challenge for the lead as the two cars roared around the track. Further back, McDowell was busy fighting off a challenge from Erb.

Moran used a slide job on lap 21 to briefly take the lead but Madden fought back with a crossover to regain the position. But one lap later, Moran would make the move stick to claim the lead. A caution with 12 laps remaining for the slowing car of Martin bunched the field once again.

The rash of yellow fever continued on lap 30 when Bloomquist spun. Pierce grabbed second on the restart as Moran continued to lead. Strickler made his way into the top-5 just behind the lead trio as McDowell, Madden and Erb also waged war within the top-5.

In the end, however, it was Moran who would cruise under the checkered flag for the victory.