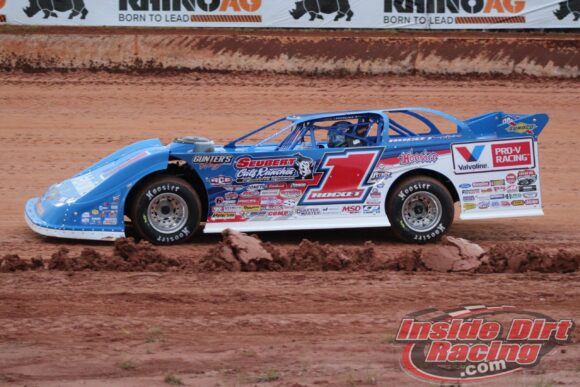 Brandon Sheppard was declared the winner when Dennis Erb, Jr. was disqualified

The World of Outlaws Morton Buildings Late Model Series commenced its portion of the DIRTcar Nationals Wednesday night at Volusia Speedway Park. At the end of the night, it was Dennis Erb Jr. who who took the checkered flag as the race winner but Brandon Sheppard was awarded the $10,000 victory when Erb failed to go to post-race inspection.

Mike Marlar was fastest in Group A qualifying by turning a lap in 16.422 seconds around the .425 mile clay oval to beat out Jimmy Owens, Scott Bloomquist, Darrell Lanigan and Donny Schatz.

Dennis Erb Jr. led the way in Group B time-trials with a time of 16.455 seconds to better the efforts of Brian Shirley, Jonathan Davenport, Brandon Sheppard and Brandon Overton.

The top-3 from each heat race would transfer to the feature.

Mike Marlar won the first heat race of the night by besting Darrell Lanigan and Josh Richards while Jimmy Owens took the second preliminary ahead of Shane Clanton and Ashton Winger.

It was Dennis Erb Jr. who took the checkered flag in the fourth heat ahead of Brandon Sheppard and Chase Junghans with Brandon Overton claiming heat five over Brian Shirley and Dale McDowell.

Tim McCreadie was the victor in the sixth and final heat of the night by besting Jonathan Davenport and Michael Norris.

Cade Dillard took the first Last Chance Showdown by beating out Mason Zeigler with Chris Madden getting the win in the second LCS over Kody Evans. Boom Briggs beat Stormy Scott to win the third LCS of the night.

Erb took the early lead at the start of the 40-lap feature with Whitener, Overton, Marlar and Sheppard following. Whitener grabbed the lead away from Erb with an outside move on the second lap.

Sheppard took fourth from Marlar on lap 5 with Owens following suit to wrest fifth away from Marlar.

For lap after lap Whitener run the top line around the track with Erb constantly challenge on the bottom side. On lap 11, the lead cars began to encounter slower traffic. Shortly after, Sheppard and Owens engaged in a battle for the fourth position.

Overton took second away from Erb on lap 15 as the entire top-5 of Whitener, Overton, Erb, Owens and Lanigan ran in tight formation with cars employing multiple grooves.

The first caution flag of the night waved on lap 26 for the slowing machine of Stormy Scott. On the ensuing restart, Overton charged by Erb to take second then by Whitener for the lead one lap later.

Whitener would regain the top spot on lap 28 while Sheppard went around Erb to assume the third position. But a lap 30 caution briefly slowed the action and set up a fierce run to the finish.

Whitener suffered a flat left rear tire from the contact while Overton was forced over the cushion which caused him to come to a stop. The two drivers then exchanged pleasantries on the back stretch before rolling to the pit area.

Erb inherited the lead following the trouble between the previous top-2. On the restart the No. 28 maintained the lead by running the bottom line as Sheppard began to apply pressure on the top side of the track with Lanigan keeping pace just behind. At the same time, Richards charged forward by taking fifth from Owens then Fourth from Marlar on the same lap.

But in the end it was Erb who crossed under the checkered flag to claim the victory.

*** Dennis Erb, Jr. was disqualified from the win due to failure to report to post-race inspection ***