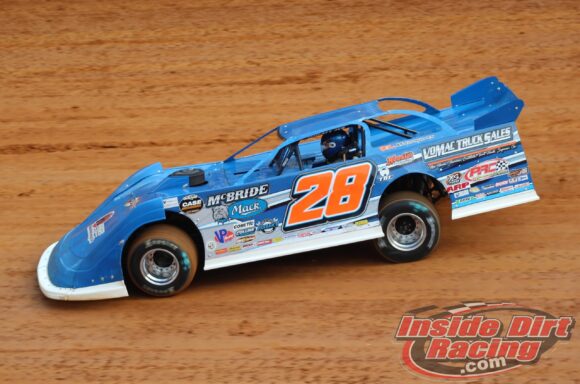 Dennis Erb Jr. entered Friday night’s action at the Marion Center Raceway leading the World of Outlaws CASE Construction Late Model Series standings and the veteran driver padded that advantage by winning the feature on the second night of three the series will spend in the Keystone State.

The Rocket Chassis driver from Carpentersville, Illinois scored $10,000 for his victory on the quarter-mile track located in Marion Center, Pennsylvania and shown live by DirtVision.com.

Feature Re-cap: When the 40-lap feature took the green flag Erb used his outside front row starting position to his advantage as he jumped into the early lead with Eckert, Clanton, Blair and Satterlee in his tire tracks. A caution just after the completion of the first lap for a spin by Kyle Hammer brought a break in the action.

On the restart, Blair moved to second bringing Clanton and Satterlee along as Eckert fell to fifth. However, Satterlee’s gain would be short lived as he slowed on lap 5 to bring out another yellow flag. On that restart, Clanton and Blair fought over second just behind Erb with Clanton emerging with the position.

Further back, Richards entered the top-5 as Erb began to pull away from his pursuers. Richards got around Gundaker for fourth on lap 14 with Lee following suit by also passing Gundaker.

A series a yellow flags through the race’s middle stages did little to harm Erb’s tight grip on the race lead. However, Blair dropped well back on a lap 25 restart which is significant in that he came into the event second behind Erb in the standings.

Over the closing laps, Erb kept control of the race and ultimately sailed under the checkered flag to score the victory.

“We’ve just been working hard at everything and we’ve got a little setup here that’s working good for me right now,” Erb told DirtVision’s Hannah Newhouse in his post-race interview. “We’re just rolling with that. We finished strong at the end of the year last year so I think that carried a lot of momentum into this year. We’re just going to keep plugging away. We work hard each night so we can end up here in victory lane.”