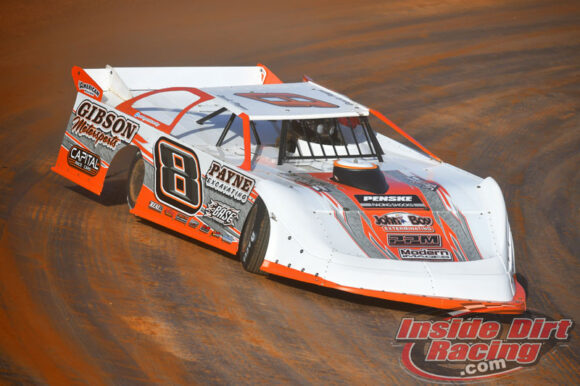 With rain all around the area, the Schaeffer’s Oil Southern Nationals event at the Tri-County Race Track went into hurry up mode as the primary class of the night simply qualified then started their feature race. Those hurried efforts paid off(just barely) as the race had to be called at the halfway point. David Payne proved to be the beneficiary as he was leading at the time rain set in.

The Capital Race Cars driver from Murphy, NC earned $7553 for his efforts on the quarter-mile track located in Brasstown, NC in a race shown live by FloRacing.com.

A total of 22 cars were signed in for competition

Feature Re-cap: At the start of the 53-lap main event it was Payne who grabbed the early advantage with Freeman, Overton, Diercks and Cook trailing. As the top-4 fell into line, Cook and Collins fought over the fifth spot. Until a caution for a flat tire on Ford’s machine slowed the pace.

Before a lap could be completed another yellow flag was displayed for a multi-car incident that involved series leader Hedgecock, Roland and Martin. Once green flag racing resumed, Overton moved into second behind Payne.

The lead duo of Payne and Overton began to encounter slower traffic on lap 14 which allowed Overton to close in. But Payne would pull away by a big margin as the race worked toward the halfway mark. Then a caution for a crash involving Denby erased Payne’s advantage on lap 27.

During the lap 27 caution, the skies opened up and heavy rain began to fall. Soon afterward, series director and track owner Ray Cook made the decision to call the race at that point. Race leader David Payne was declared the winner of the event.

Jonathan Davenport scores another payday with Hawkeye 50 triumph at Boone