The Southern Nationals Bonus Series and Iron Man Late Model Series co-sanctioned the 10th annual Buddy Rogers Memorial at Tazewell Speedway on Sunday night. The race honored the late Rogers who was a multi-time track champion at Tazewell Speedway and other tracks across East Tennessee. When the night was over, it was David Payne taking his own classic look to victory lane.

Eighteen cars entered the $4,400 to win event. Cars were split into two groups of qualifying with the first group earning spots on the inside rows and the second group taking the spots on the outside rows. Vic Hill was the fastest in group A to earn the pole position for the 44-lap race. Casey Roberts was fastest in group B to take the outside front row starting spot.

As the field took the green, Hill and Roberts raced side-by-side for the lead until Roberts took the position going into turn 3. Hill settled behind Roberts with Payne moving into the third spot. Roberts put several car lengths on Hill as the first few laps were in the books.

Deeper in the field, some good battles were taking place as drivers looked to move forward. Dakotah Knuckles stalked Chad Ogle for fourth. Defending race winner Brian Smith and Chicky Barton spent most of the race battling each other. Kentucky drivers Tommy Bailey and Todd Coffman raced each other hard inside the top 10. 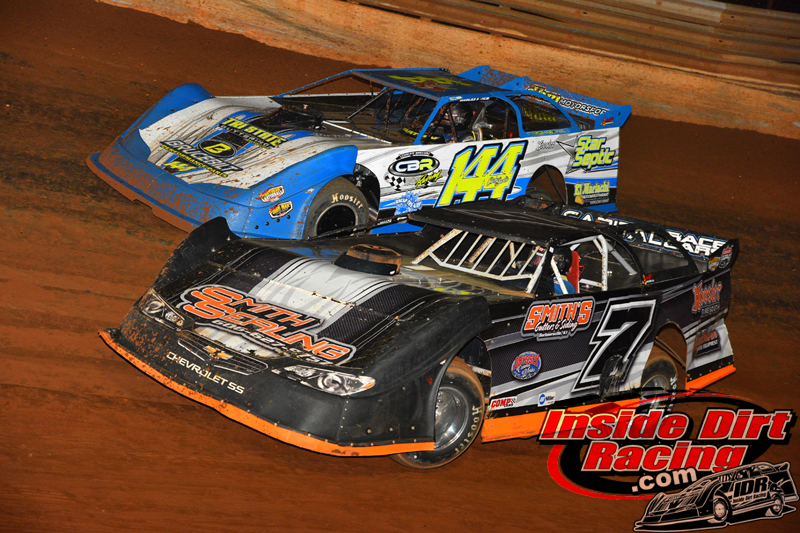 The first caution of the race came on lap 17 for a slowing Keith Howell. The field was lined back up for the restart. As Roberts maintained the lead, Payne used a strong move on the outside to take second from Hill. Hill looked to fight back, but changed his line to settle behind Payne as Ogle and Knuckles were fighting for fourth.

The ongoing battle between Barton and Brian Smith came to a head on lap 21 when Smith turned Barton sideways in the middle of turns 1 and 2. As Barton’s car went for a long slide, most of the racing groove was blocked. Jeff Neubert was collected, ending a promising night for the Rockford, Tennessee driver. Several other cars spun to cause a huge blockade in turn 2. Race leader Roberts had trouble slowing down and spun as he slammed on the brakes to miss the pileup. Roberts was able to miss the stalled cars and slightly brushed the turn 2 wall with his left quarter panel as he slid backwards. Roberts was able to continue as the race leader. 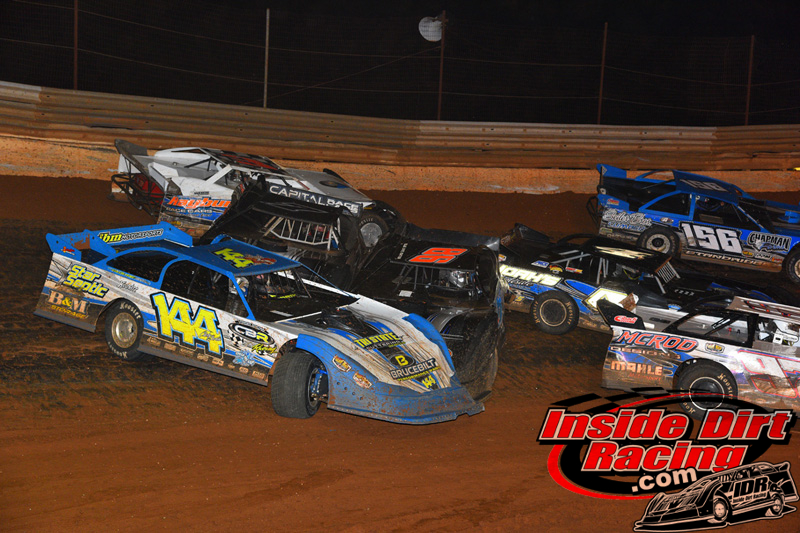 Several cars were involved in a spin that started with Smith and Barton.

Following the restart, the race saw the leaders settle into their spots as a number of cars eventually retired from the race. The ongoing battle between Smith and Barton almost had a second act as Barton tried to spin Smith coming out of turn 4 as Smith passed Barton for position.

As the laps wound down, Payne began pressuring Roberts for the lead. Roberts car was losing some of its handling and Payne was eager to pounce. Payne pressured Roberts for several laps until the complexion of the race changed on lap 40. 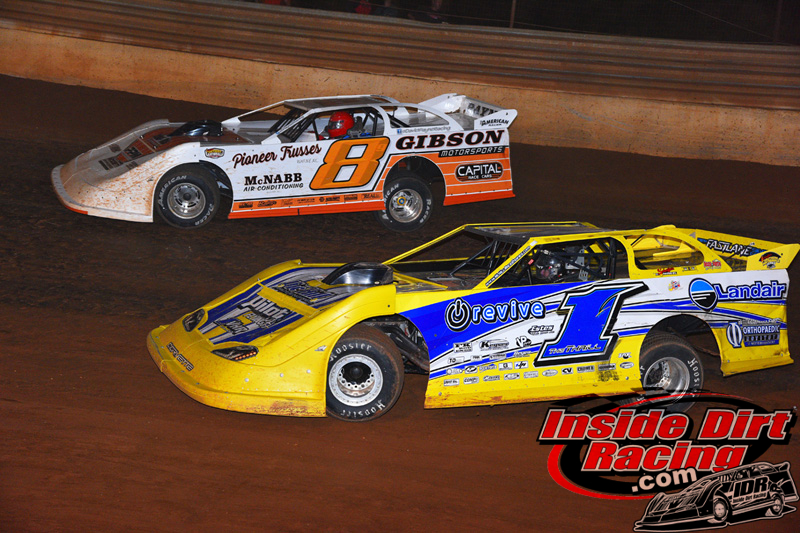 Barton had something break on the rear of his car. Flames could be seen under the rear end of his machine as he entered turn 1 on lap 40. The car spun and bounced off the turn 2 wall. Roberts was not so lucky this time has he got a piece of Barton’s car. The contact cut the right rear tire on his car and eliminated any chance of winning. Hill also collected a piece of Barton, but the damage was limited to the body.

The green flag waved again with 4 laps to go with Payne now leading the field. Knuckles dove under Hill for second, but could not complete the pass. Knuckles eventually tucked behind Hill to protect third place from Ogle. Payne led the final 4 laps to claim his second Buddy Rogers Memorial. 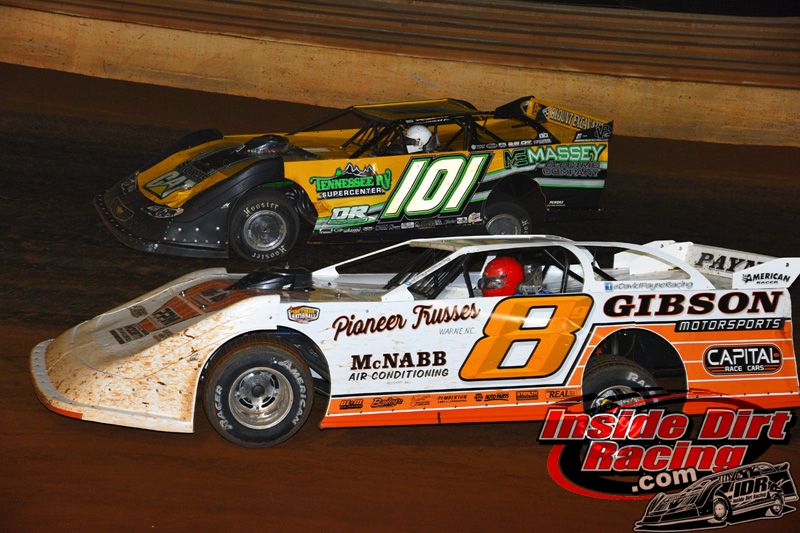 “First of all, I want to thank the fans for coming out tonight,” Payne said in victory lane. “Every time we come here to race, the place is always packed. I really love racing here and the fans are one reason why.”

Payne was sporting a new look on his #8 machine. The look was a throwback to his father’s (Ronnie) racing days.

“We decided to do something like what my dad used to run,” Payne said earlier in the evening. We got with Chris Medley who does the graphics on this car. We gave him some pictures and he got it almost exactly to how my dad’s car used to look. We even put some of my dad’s old sponsors on there to pay tribute to them, even though a couple of them have passed away. I’m really proud of it. 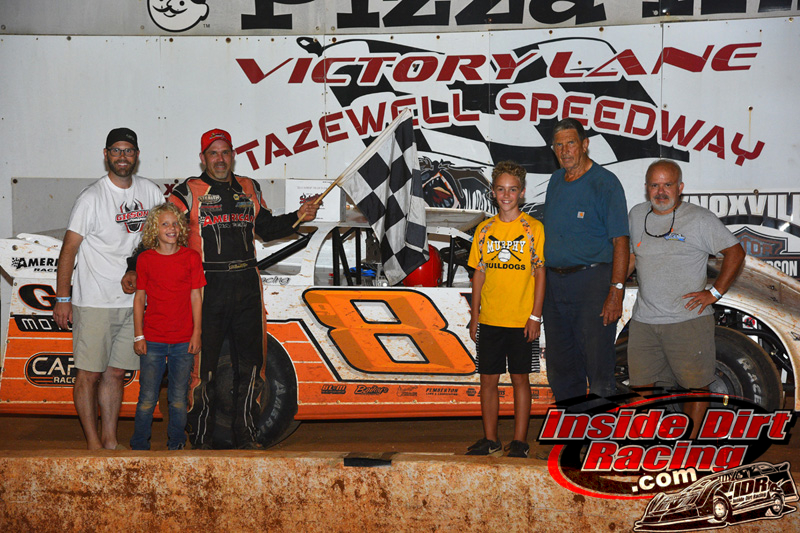