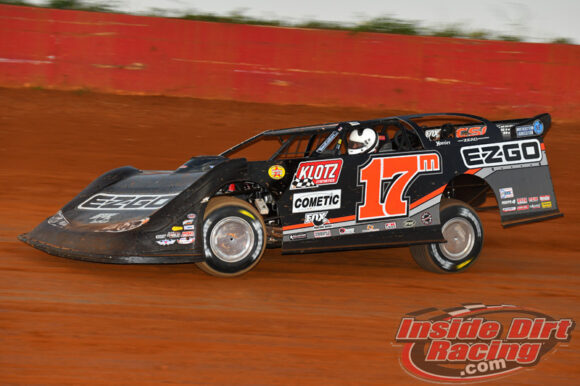 Dale McDowell held off a late challenge for the win

Easily one of the best stories so far in this early part of the 2022 season was that of Dale McDowell winning in his first race back from cancer surgery in January at the Sunshine Nationals at Volusia Speedway Park. On Thursday night at that same track, the Hall of Fame driver once again returned to victory lane as the winner of a Gator Trophy in the Gator Nationals.

This was the second World of Outlaws CASE Construction Late Model Series event of the week in the Gator Nationals at the Barberville, Florida track. The Team Zero Race Cars driver from Chickamauga, Georgia earned $10,000 in a race shown live by DirtVision.com.

A total of 58 cars were signed in for competition.

Feature Account: At the start of the 40-lap feature it was Hammer who took the early lead with Overton, Thornton, Madden and McDowell trailing. After the completion of the first lap. Overton, for the second night in a row, had his car give off a puff of smoke which brought out a caution flag.

On the restart, Thornton assumed second behind Hammer with Madden, McDowell and Whitener rounding out the top-5. On lap 3, Whitener rose to fourth by passing McDowell. But a caution flag would wave once again on lap 5 when Chris Simpson slowed.

Whitener came to second on the lap 5 restart as Thornton fell back behind Madden and McDowell. After a lap 9 bobble by Whitener, Madden and McDowell passed by to claim second and third respectively. Meanwhile, Hammer built a lead of more than a second. Further back, Moran and Lanigan were fighting for sixth just behind Thornton.

Thornton and Moran pushed Whitener further back on lap 16 just before a yellow flag was shown to the field one lap later. Marlar had slowed to bring out that caution. At the time of caution, the running order continued as Hammer, Madden, McDowell, Thornton and Moran.

McDowell bolted to the lead on the lap 17 restart when Hammer slipped high. Madden and Moran also passed the early leader. Hammer spun on lap 19 and was then banged into by Brent Larson.

Moran jumped to second on the ensuing restart but another caution would slow the action again one lap after the halfway point when Josh Richards spun.

Whitener began to rally just after the halfway point as he took to the high side of the track passing Moran for third on lap 25. At the front, McDowell and Madden began to separate themselves from the ongoing fight for third. Larson slowed on lap 30 with a flat left rear tire with McDowell continuing to lead Madden, Moran, Whitener, Lanigan and Thornton.

On the restart, Madden slipped high going into turn one as Whitener slid by with contact between the two cars being the result. Madden fell back fifth as Whitener dropped to fourth.

Moran closed in on McDowell as the laps clicked away but in the end, the veteran McDowell held back a last lap charge to sail under the checkered flag for his second WoO Late Models victory of the season.

Turn 2 Blog: What did the early Lucas Oil races tell us?